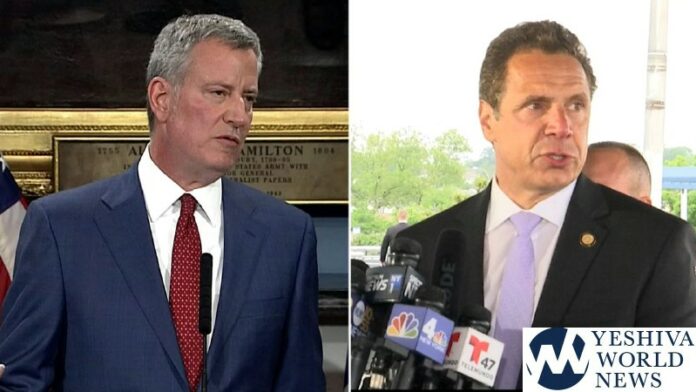 In the interview, DeBlasio was asked about allegations that Gov. Andrew Cuomo threatened Queens Assemblyman Ron Kim, who says he was yelled at and threatened by Cuomo after criticizing his handling of the staggering number of COVID-19 deaths at nursing homes – which is now being looked into by federal authorities.

“It’s a sad thing to say … but that’s classic Andrew Cuomo. A lot of people in New York state have received those phone calls. The bullying is nothing new. I believe Ron Kim and it’s very, very sad, no public servant no person who’s telling the truth should be treated that way. The threats, the belittling, the demand that someone change their statement right that moment … many many times I’ve heard that and I know a lot of other people in this state have heard that,” De Blasio said in an MSNBC interview.

Cuomo has been slammed in the last week with accusations that he covered up New York’s nursing home death toll. Families on Wednesday called for a federal probe.

The state’s reported death toll ballooned from around 9,000 – a number that excluded nursing home residents who died of coronavirus at hospitals – to just over 15,000 after a state attorney general report.

Last week, an aide conceded the administration withheld the nursing home death toll from state lawmakers out of fear it would be used against the state by the Trump Administration.

Some lawmakers have called for revoking Cuomo’s emergency powers.

“It is clear that what is happening here is criminal, the Governor’s emergency powers need to be revoked, and there must be an investigation into the implementation of the policy, the cover up, and the continued attempts to avoid necessary transparency and accountability for grieving New York families,” Rep. Lee Zeldin said in a statement following reports of the FBI investigation.