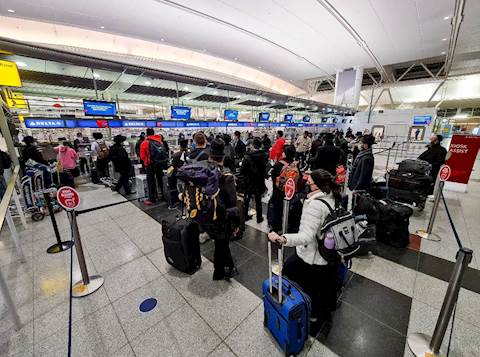 A non-religious man threatened to kill a Chabad photographer on the first evacuation flight of Israelis from New York back to Israel on Monday. The photographer, Chaim Tweeto, was standing in the aisle near the non-religious passenger.

According to testimonies from other passengers that were published by BeChadrei Charedim, the non-religious passenger sat in the back of the plane and began antagonizing a number of Chabad men who were sitting in their seats, even before the plane took off.

The passenger told the Chabad Chassidim that they weren’t sitting 2 meters away from one another. They responded and said that they had been together for the past month, and there was no issue with them sitting close together on the flight as well. The man began to yell at them to get away. The Chassidim did not want to cause a story so they moved further away, and things calmed down.

However, as the flight neared its culmination, the man began to scream at Chaim Tweeto, who had gotten up to go to the back of the plane to get a drink. At the same time, a woman, who was connected to the aggressive man, needed medical care and Chaim ran to alert one of the flight attendants. The man, perhaps out of distress, began to scream at the group of Charedim: “You’ve overrun this space. Because of you, she fainted. You are guilty because you are standing so close together.”

The flight attendant asked Tweeto what happened, and he said that the aggressive man was blaming the Chareidi students for the woman’s developing medical condition. “Don’t react and don’t pay attention to him. Remain calm,” the attendant reportedly told Tweeto and the group.

The aggressive man heard what was said and became enraged. “I will kill you once we land in Ben Gurion Airport. Just wait, I will beat you to a pulp,” the man told Tweeto. He then attempted to attack Tweeto in the airplane, but the flight attendants intervened.

Tweeto did not file a complaint on the plane as there was a lot of pressure from other passengers to deplane.

After the flight, Tweeto told Bechadrei, “It is appalling to see how far the seeds of anti-Charedi slander by the media spread.”