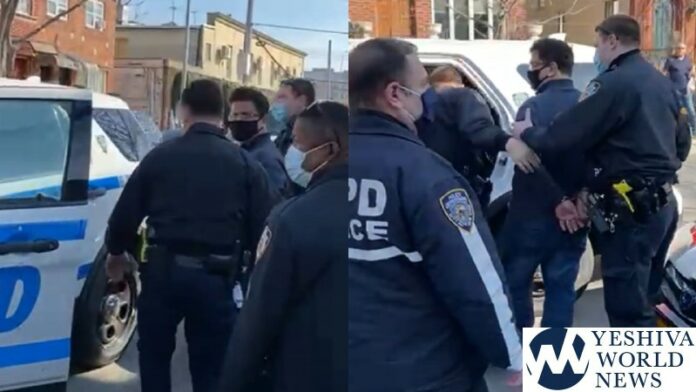 A man who has allegedly kept his wife an Agunah for 17 years was arrested by the NYPD on Thursday afternoon.

A number of years ago, the man married a second woman while still refusing to give his first wife a Get. Earlier this week, protestors began to gather outside his home, with hundreds attending each night demanding that he give a Get.

Meanwhile, unbeknown to most people, the second wife and children were allegedly being severely abused. A voice note went viral on Thursday morning of the man violently abusing his wife and her children. The audio clip is simply too horrifying to publish on YWN. A community member who heard the clip reached out to the wife, and convinced her to press charges.

Sources tell YWN that the NYPD’s Domestic Violence Unit interviewed the woman, who detailed the extensive violent abuse allegations to them.

Police arrived at the home, and after a few minutes, he was taken into custody.

Law enforcement sources tell YWN that the man is expected to he charged with assaulting his wife (such as her being allegedly strangled), as well as for assaulting a minor.

VIDEOS OF THE ARREST: