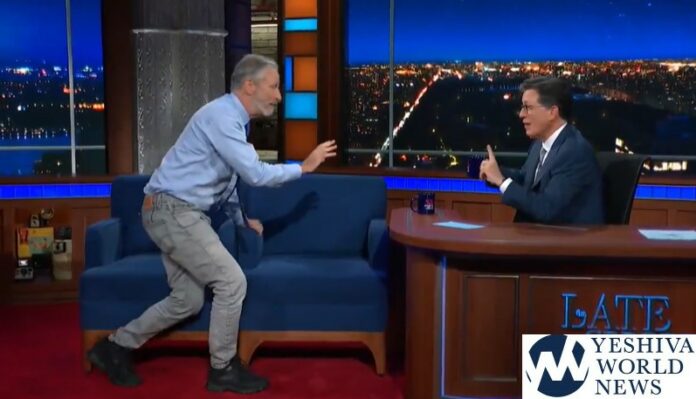 Liberal comedian Jon Stewart is under fire from the left for making an impassioned argument in favor of the Wuhan lab-leak theory during his Monday night appearance on “The Late Show.”

Stewart shocked Stephen Colbert’s audience when he suggested it isn’t far-fetched to believe that the coronavirus pandemic originated from a Chinese coronavirus lab, comparing it to an “outbreak of chocolaty goodness near Hershey, Pennsylvania.”

Making an appearance CBS’s The Late Show with Stephen Colbert on Monday—the show’s first episode with a live studio audience since the pandemic upended production in March 2020—Stewart pointed the finger at the Wuhan Institute of Virology as he discussed the origins of the virus, which has gripped much of the world since early 2020.

The former host of The Daily Show said: “I think we owe a great debt of gratitude to science. Science has, in many ways, helped ease the suffering of this pandemic—which was more than likely caused by science.”

Mockingly taking on the stance of an investigator, Stewart then said: “Novel respiratory coronavirus overtaking Wuhan, China. What do we do? Oh, you know who we could ask? The Wuhan Novel Respiratory Coronavirus Lab.”

“The disease is the same name as the lab,” he went on. “That’s just a little too weird, don’t you think? And then you have some scientists who are like, ‘So wait a minute, you work at the Wuhan Respiratory Coronavirus Lab. How did this happen?’ And they’re like, ‘Mmmm, a pangolin kissed a turtle?’

Earlier this week, Former Secretary of State Mike Pompeo said Sunday that he believes the coronavirus pandemic originated with a leak out of a lab in Wuhan, China, and that under the Trump administration the U.S. came close to uncovering the details of how it began.

“We have a really good idea what happened here,” Pompeo said. “There is an enormous amount of evidence that there was a leak from the Wuhan Institute of Virology. There is a pile of evidence a hundred feet high, I have high confidence that that’s the case. We pressed the Chinese Communist Party really hard – not just the State Department, but our CDC and others too.”