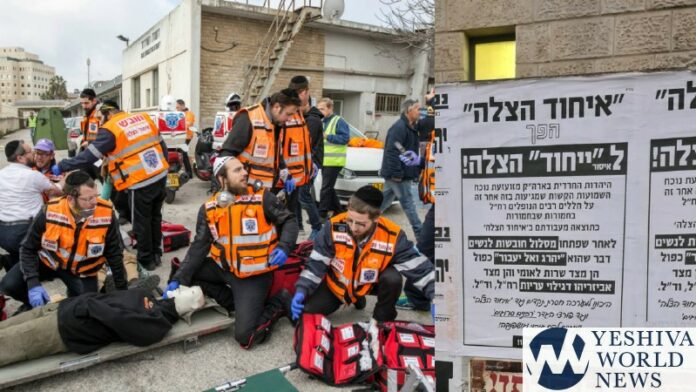 Posters went up in the more Chareidi sections of Beit Shemesh accusing United Hatzalah of transgressing the prohibition of yichud by training female EMTs to respond to medical emergencies. Extremist elements in the Chareidi community of Ramat Beit Shemesh posted the pashkvillim that declared that having women respond to emergencies, causes issues of Yichud (seclusion).

The posters went on further to claim that female EMTs are committing a double sin both by being involved in Sherut Leumi (national service) and also by transgressing “Abizrahu D’Giluy Arayos”. United Hatzalah refutes these claims as they utilize volunteers over the age of 21 and does not have national service volunteers responding to emergencies as EMTs. Additionally, regarding the claim of prohibited intimacy, the same objections raised against females treating males could conceivably be raised regarding males treating females.

Hatzalah tells YWN that if the person requesting help is female, “it would be more halachically correct that she be treated by another female than by a male and therefore the need for female EMTs is vital to strengthen the halachic aspects of emergency treatment, especially in cases of emergency childbirth or miscarriage.”

The poster also announced an upcoming campaign against United Hatzalah and against the “knitted kippa rabbis” (Rabbonim Srugim) who support them. However, according to the United Hatzalah website, the official rabbinic board of the organization (though surely other rabbonim are involved in different capacities as well) are: Rav Ezriel Auerbach, Rav Sariel Rosenberg, Rav Aryeh Dvir and Rav Yehuda Silman. None of these are “knitted-kippa rabbis” but rather Rabbonim of the Chareidi community in Israel.

President and Founder of United Hatzalah Eli Beer responded to the outrageous criticism by saying: “I am proud that United Hatzalah has women volunteers. We are the first organization to unite Ultra-Orthodox, Modern-Orthodox, Secular, Jews, Non-Jews, men and women alike. United Hatzalah stands as a shining example to other Jewish rescue organizations demonstrating that no one should be excluded based on their religious beliefs or their gender.

“We are going to continue to grow United Hatzalah and serve all communities. We will continue to increase the number of all of our volunteers, men and women alike, this is the best solution for all communities. This is especially true for the Chareidi community. Having women provide emergency medical care to other women who are in need of help is not just an issue of modesty, but it is a humanitarian comfort as well.

You don’t have to be Chareidi to feel more comfortable having someone of the same gender treat your injuries, especially if they are of an intimate nature. Everything we do complies with Halacha. We will not allow radical elements of any community to stop us from performing our duty and our mission which is to provide medical care and assistance and save lives, regardless of gender, religion, nationality. We are all human and we will work together to help everyone in need.”