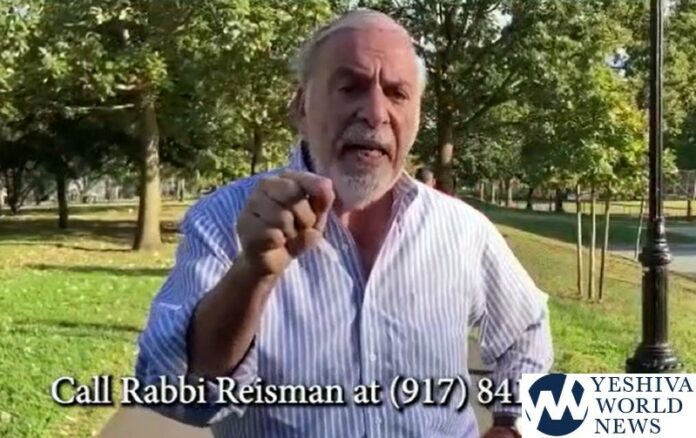 By now voters in Flatbush are aware that there is a city council race for the 48th District between Steven Saperstein and Inna Vernikov. Saperstein, the winner of the Democratic primary, is a well-known individual, who ran previously as a moderate republican, has campaigned gracefully and respectfully, never attacking his opponent with negative mailers or ads. He’s been endorsed by respected communal organizations like the FJCC and Sephardic Federation and earned the support of the Police and Fire unions because his views and positions are really conservative. It’s important to note that Saperstein only ran as a Democrat so he could sit with the majority in the City Council and better deliver for his constituents. It will prove to be a smart decision, and a win for the entire district should he get elected.

As for Inna, Flatbush residents have been bombarded on a near daily basis with her negative mailers attacking Mr. Saperstein as some sort of AOC left wing progressive. These attacks are false and ridiculous. After all, Saperstein previously ran twice as a Republican. But to some candidates the truth simply doesn’t matter, anything and everything is used to smear an opponent in order to win.

Unfortunately nobody should be surprised. The last time our community was inundated with this kind of deplorable filth was the forgettable Yoni Hikind- Kalman Yeger City Council race, four years ago. The common thread between those two nasty campaigns? Dov Hikinds was involved then and he is now.

Inna has entrusted Mr. Hikind to run her election. But it might as well be Hikind running now. Political observers see Hikind’s aggressive tactics and attacks on Saperstein as a way for him to regain political power through his surrogate, Inna. His personal attacks on Saperstein have escalated as the campaign heats up and voters are realizing just how absurd it would be to send a firebrand Republican to the Democratically dominated City Council to represent us. Saperstein to his credit has been turning the other cheek and I’ve been impressed by his focus and unwillingness to go negative. But the relentless negative ads against Saperstein continue in this week’s newspapers and mailers and when you see them, know who is responsible, none other than Dov Hikind. Voters should soundly reject this negativity on Election day.

Mr. Hikind though has crossed a line recently and that’s why I’m writing this. Despite running one vulgar ad after another – Dov’s latest anti Saperstein video “demands” that community members call leading Rabbonim in Flatbush to confirm that Mr. Saperstein actually took pictures with them. As if the pictures Saperstein is using were photo-shopped from thin air. Hikind stoops even lower by sharing the Rabbonim’s private phone numbers on the video, with subtitles urging people to call them. Really Dov? People should call and harass Harav Hagoan R’ Yisroel Reisman Shlita to inquire if he’s lying? Frankly speaking we’ve rarely seen this kind of reckless chutpzah before and this is my protest for Kovod Hatorah. But this is hardly the first time Dov has used Rabbonim and Gedolim for his own political agenda.

In another brazen Chutzpah, it has been confirmed that on a random day a few weeks ago, the bell rang at the home of a revered Rosh Yeshiva and Gadol. Waiting at the door was Hikind and Inna. Neither Hikind or Inna had ever met this Rosh Yeshiva before. Hikind asked him for an endorsement for Inna, which he immediately declined. Hikind then asked if he can just take a picture with him, which this Rosh Yeshiva also refused. Mr. Hikind didn’t take that as a no. Instead, Hikind and his crony David Strobin then attempted to place ads in various publications which claimed that this Rosh Yeshiva had endorsed Inna for city council. One editor of a highly-respected newspaper had the foresight to call this Rosh Yeshiva and ask if he had endorsed Inna, to which he replied that he had not. This exercise in chutzpah has repeated itself with multiple Rabbonim all across Flatbush. Dov, it must be asked, who is really the one attempting to exploit Rabbonim for a political agenda? I beg you, cut it out already.

Lets be blunt. Flatbush voters do not want Hikind style negative campaigns and they really don’t want politicians using our Rabbonim in their negative ads. Whether going to a Rov or a Rosh Yeshiva and asking for a picture or endorsement is respectful or appropriate in the first place, is really up to the respective Rabbi or Rov. But what many find intolerable is basing Inna’s entire campaign against her opponent by creating mailers and ads questioning this picture or that alleged Rabbinic endorsement, when your own actions are highly questionable yourself. I don’t fault Inna for this, I fault you Dov. You know better. Or at least you should. Are you so desperate for power and relevance?

The Hikind political gamesmanship is old and tired and needs to stop. We have so many real issues to confront and this is an unneeded distraction and embarrassing. A vote for Inna is unfortunately a vote to bring Dov Hikind back into our lives. Let’s get serious and fight together for the common good, not against each other.