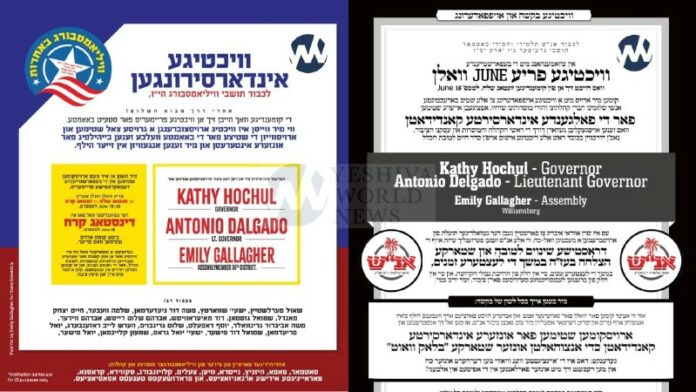 Growing momentum for Governor Kathy Hochul’s re-election campaign as major factions in the Jewish community in New York unite behind her ahead of the Democratic primary on June 28.

This week, the two largest Hasidic voting blocs in New York issued endorsement letters in their weekly publications. Both Satmar factions in Williamsburg, the “Aharonim” and “Zalonim”, joined other Hasidic sects in calling Hochul a close friend and an ally that has earned the trust of the community. A few months ago, over a dozen leaders in the Five Towns and Far Rockaway in Queens stood with Hochul as they announced their support.

More endorsements are slated to be made public in the coming days.

Hochul has proven to be a staunch and reliable ally of the Jewish community in the past eight years, serving as lieutenant governor and since becoming governor last year.

Hochul has established a working relationship with community leaders and has shown up to local events and visited day schools and yeshivas across the state. She has also spoken out forcefully against antisemitism and the rise in violent attacks against Jews, in particular Hasidic Jews who are more visibly Jewish.

In just one year, Hochul has allocated more funds for education programs in private schools and yeshivas, added millions in grants to strengthen safety and security measures at Jewish institutions and nonprofit organizations and increased the reimbursement cap for victims of hate crimes by $2,000. Despite facing pressure from progressives and other groups, Hochul also amended the new bail reform law so that it would allow the police to arrest people for hate crimes that had previously required only a desk appearance ticket.

Last December, the governor vetoed a bill that would have allowed the town of Blooming Grove to tax property sales and use the proceeds to buy land it wants to conserve to thwart housing development for the growing Hasidic community.

In the endorsement letters, the community leaders expressed their gratitude to Governor Hochul and her running mate Lt. Governor Antonio Delgado. They urged members of the community who are eligible to vote to make their voice heard by coming out to vote for another four years of accomplishments that would benefit the community.

The primary for governor and lieutenant governor is on Tuesday, June 28. Early voting starts on June 18.