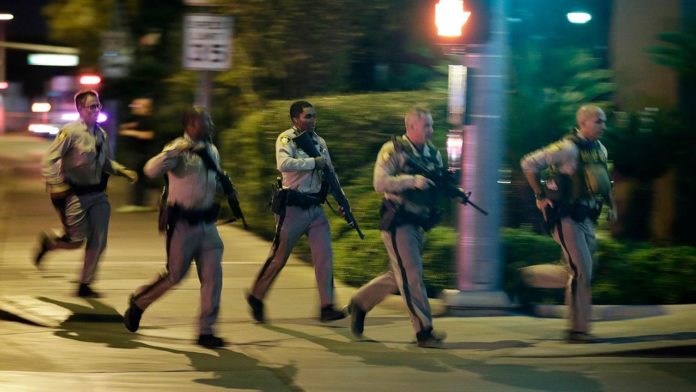 A gunman perched high on the 32nd floor of a Las Vegas Strip casino unleashed a shower of bullets down on an outdoor country music festival below, killing at least 50 people and wounding more than 400 as tens of thousands of frantic concert-goers screamed and ran for their lives, officials said Monday. It was the worst mass shooting in modern U.S. history.

Country music star Jason Aldean was performing Sunday night at the end of the three-day Route 91 Harvest Festival when the gunman opened fire across the street from inside the Mandalay Bay Hotel and Casino. SWAT teams quickly descended on the concert and the casino, and officers used explosives to get into the hotel room where the suspect was inside, authorities said. The gunman died at the scene and was identified by Clark County Sheriff Joseph Lombardo as 64-year-old Stephen Paddock of Mesquite, Nevada. A motive as not immediately known.

Aldean was in the middle of a song when the shots came rapidly: Pop-pop-pop-pop. Video of the shooting then showed Aldean stopping and the crowd getting quiet as if they were unsure of what had just happened. The gunman paused and then fired another volley of muzzle flashes from the gold glass casino as more victims fell to the ground while others fled in panic. Some said they hid behind concession stands and other crawled under parked cars.

Kodiak Yazzie, 36, said the music stopped temporarily when the first shots began and the tune even started up again before the second round of pops sent the performers ducking for cover and fleeing the stage.

Thousands in the crowd fled as the bullets ran rampant. Monique Dumas from British Columbia, Canada, said she was at the concert, six rows from the front of the stage when she thought she heard a bottle breaking, and then a burst of popping sounds that may have been fireworks. She said as she made her way out, it was “organized chaos” as everyone fled. “It took four to five minutes and all that time there was gunfire.”

In addition to Paddock, police said they located an Asian woman who may have been his roommate — Marilou Danley, 62. Lombardo said they believe this was a “lone wolf” attack.

Marilou Danley is being sought for questioning re the investigation into the active shooter incident. If seen please call 9-1-1! pic.twitter.com/Z83XvcHejH

Police shut down the usually busy Las Vegas Boulevard and authorities across the state and federal ranks converged onto the scene as dozens of ambulances ferried those struck by gunfire. Nearby Interstate 15 and flights at McCarran International Airport were also halted. Hospital emergency rooms were jammed with victims delivered by ambulance. Others loaded the wounded into their cars and drove them to hospitals.

Jose Baggett, 31, of Las Vegas, said he and a friend were in the lobby of the Luxor hotel-casino — directly north of the festival — when people began to run, almost like in a stampede. He said people were crying and as he and his friend started walking away minutes later, they encountered police checkpoints where officers were carrying shotguns and assault rifles.

“There were armored personnel vehicles, SWAT vehicles, ambulances, and at least a half-mile of police cars,” Baggett said.

Among those killed were two off-duty police officers who were attending the concert and two other on-duty officers were wounded, including one in critical condition, police said.

Hours after the shooting, Aldean posted on Instagram that he and his crew were safe and said the shooting was “beyond horrific.”

Tonight has been beyond horrific. I still dont know what to say but wanted to let everyone know that Me and my Crew are safe. My Thoughts and prayers go out to everyone involved tonight. It hurts my heart that this would happen to anyone who was just coming out to enjoy what should have been a fun night. #heartbroken #stopthehate

“It hurts my heart that this would happen to anyone who was just coming out to enjoy what should have been a fun night,” Aldean said.

The shooting at the sold-out Route 91 Harvest festival was the worst mass shooting in modern U.S. history. Forty-nine people were killed when a gunman opened fire at the Pulse nightclub in Orlando in June 2016.

Sunday’s shooting came more than four months after a suicide bombing at an Ariana Grande concert in Manchester, England, that killed 22 people. Almost 90 people were killed by gunmen inspired by Islamic State at the Bataclan concert hall in Paris during a performance by Eagles of Death Metal in November 2015.

**VIDEOS BELOW MAY BE GRAPHIC TO SOME – DISCRETION**

BREAKING: There was a tragic active shooter situation at the south end of the Las Vegas Strip. Shooter shot from 32nd floor of Mandalay Bay. pic.twitter.com/v1bOrL8ToE