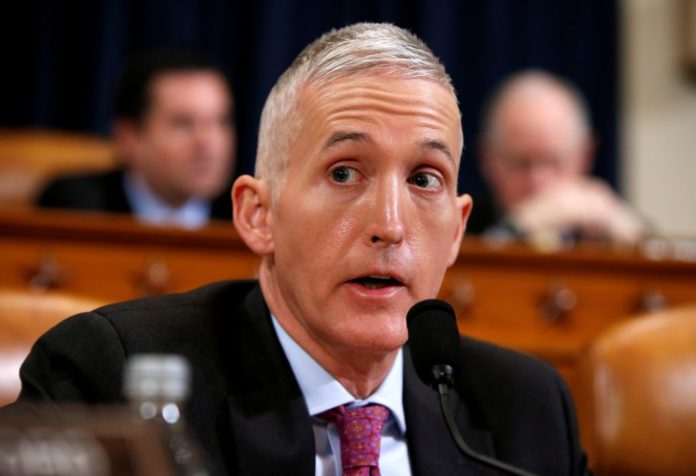 South Carolina GOP Rep. Trey Gowdy added his name Wednesday to the growing list of committee chairmen announcing they will not seek re-election, saying this is the right time for him to leave politics and return to the justice system.

Gowdy is chairman of the House Oversight and Government Reform Committee and will be remembered for leading a two-year investigation into the deadly 2012 attacks in Benghazi, Libya, which focused heavily on Hillary Clinton’s role as secretary of state. It was the committee’s probe that revealed Clinton used a private email server for government work, prompting an FBI investigation that proved to be an albatross in her presidential campaign.

Now, Gowdy is a key member of one of the Russia probes in Congress and the leader of a renewed investigation into the FBI and Clinton’s emails.

Gowdy was elected in the 2010 tea party wave that returned control of the House to Republicans. He is the ninth House committee chair to head for the exits, but several of the others faced the prospect of being term-limited out of that role or faced difficult re-election prospects. Gowdy did not have to account for such factors when making his decision, which made his decision all the more surprising.

In his statement, Gowdy, a former federal prosecutor, said: “whatever skills I may have are better utilized in a courtroom than in Congress, and I enjoy our justice system more than our political system. As I look back on my career, it is the jobs that both seek and reward fairness that are most rewarding.”

Rep. Steve Stivers, R-Ohio, and the chairman of the arm that oversees Republican election efforts in the House, predicted that Gowdy’s seat will stay solidly in Republican control in November. “Trey Gowdy exemplifies the persona of a public servant,” Stivers said.

Gowdy has played a key role in the House intelligence committee’s investigation into Russian election interference and any possible coordination with President Donald Trump’s campaign.

In closed-door interviews, he has been the chief questioner for the Republicans on the committee, relying on his prosecutorial experience to cross examine numerous witnesses. Among those witnesses were the president’s son, Donald Trump Jr., former White House chief strategist Steve Bannon and Glenn Simpson, a Washington opposition researcher behind a dossier of allegations about Trump and his ties to Russia.

This week, Gowdy was among the committee members pushing for the release of a memo, drafted by Republicans, that alleges abuses of the government surveillance powers in the Russia investigation. Democrats have called the memo a “distraction” and a selectively edited group of GOP talking points.

Separately, Gowdy has used his chairmanship of the Oversight and Government Reform committee to renew scrutiny of the FBI’s handling of its investigation into Clinton’s use of a private email server.

The full statement released by Gowdy (SC-04) announcing he will leave Congress at the end of this term and return to work in the justice system:

“Words cannot adequately express my gratitude to the people of South Carolina for the privilege of representing them in the House of Representatives. The Upstate of South Carolina has an incredible depth and breadth of assets including numerous women and men capable of representing us. I will always be grateful for the opportunity to serve in the People’s House and-prior to Congress-to advocate on behalf of justice in our court systems.

I will not be filing for re-election to Congress nor seeking any other political or elected office; instead I will be returning to the justice system. Whatever skills I may have are better utilized in a courtroom than in Congress, and I enjoy our justice system more than our political system. As I look back on my career, it is the jobs that both seek and reward fairness that are most rewarding.

There is no perfect time to make this announcement, but with filing opening in six weeks, it is important to give the women and men in South Carolina who might be interested in serving ample time to reflect on the decision.

To my wife, Terri, and our two children, Watson and Abigail: thank you for all you sacrificed, missed, or did alone so I could serve as both a prosecutor and a member of the House.

To my parents and my three sisters: thank you for having confidence in me and high expectations for me, even when I did not.

To the women and men I worked with at the South Carolina Court of Appeals, the United States District Court, the U.S. Attorney’s Office, the 7th Circuit Solicitor’s Office, and in Congress: thank you for the texture, depth and joy you added to life.

To the law enforcement officers and victims of crime: thank you for personifying courage.

To those across South Carolina and our country who, over the past 7 years, have expressed words of encouragement, accountability and even criticism: thank you. All are needed for those in public service.

There is a time to come and a time to go. This is the right time, for me, to leave politics and return to the justice system. Full statement here → pic.twitter.com/7I8AApqvs1