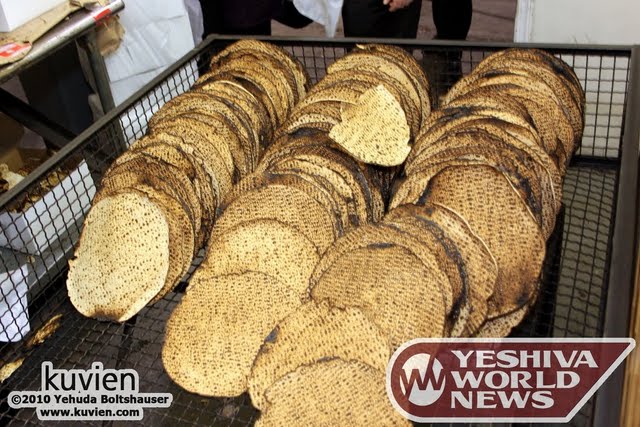 More than 100,000 matza boxes and 75,000 bottles of grape juice will be distributed as part of Yomtov food packages during the week in the Former Soviet Union (FSU), with the shipment expected to help some 100,000 Jews living there. The packages will be delivered in a special distribution campaign for Pesach with the assistance of the International Fellowship of Christians and Jews (IFCJ), under the presidency of Rabbi Yechiel Eckstein and in cooperation with the Federation of Jewish Communities of the CIS, headed by Mr. Lev Leviev.

One of the special matzah shipments arrived in Odessa last week from Ukraine, and was added to the selection of local products in the special food packages for the Jewish community for the holiday. Each package includes products worth $80 (280 NIS), about 30% of the average local wage. Without these packages, those Jews on welfare struggling financially would not have been able to celebrate Pesach properly.

The aid packages have been put together by the IFCJ for more than 10 years and are delivered to many countries, including Ukraine, Russia, Azerbaijan, Uzbekistan and Belarus. The purchase of the local products, their packaging and the distribution of the packages are supervised by local Chabad emissaries, who know the local communities and their financial requirements.

“The food parcels distributed to the Jews of Ukraine with the help of the IFCJ are very much needed in our present situation,” notes Rabbi Pinchas Vishtaki, a rabbi and Chabad shaliach from Donetsk. “These packages come to the needy Jewish residents, some of whom live in battle zones, as well as to those who have lost their homes and now live as refugees. Without these packages the Jews in Ukraine would celebrate Yomtov without observing the mitzvah of eating matza and without drinking four cups of wine.” We are so grateful to Rabbi Yechiel Eckstein who works day and night to help the Jewish community in Ukraine.”

Rabbi Yechiel Eckstein, President of the International IFCJ, said: “One of the most beautiful customs of the holiday is the custom of the kimcha d’pischa. The Haggadah commands us to ensure that everyone who is needy will be able to eat and celebrate Pesach properly. We are proud to be able to help the Jewish communities in crisis and distress all over the world.”