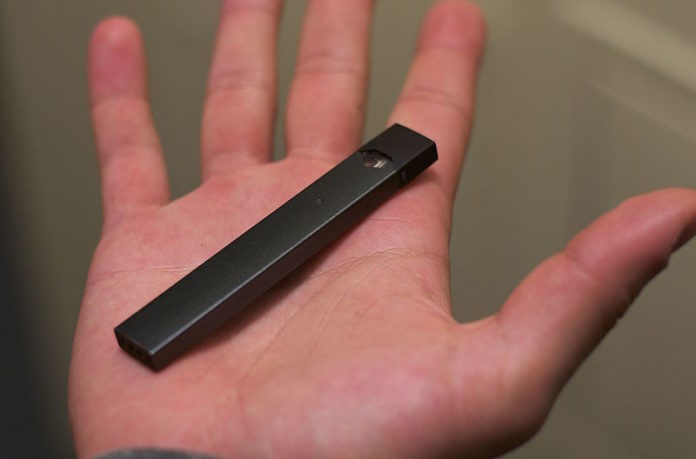 Federal health officials on Tuesday announced a nationwide crackdown on underage use of a popular e-cigarette brand following months of complaints from parents, politicians and school administrators.

The Food and Drug Administration issued warnings to 40 retail and online stores as part of a monthlong operation against illegal sales of Juul to children. Investigators targeted 7-Eleven locations, Shell gas stations and Cumberland Farms convenience stores as well as vaping shops.

FDA regulators also asked manufacturer Juul Labs to turn over documents about the design, marketing and ingredients of its product. The rare request focuses on whether certain product features are specifically appealing to young people.

Like other e-cigarettes, Juul is an electronic device that turns liquid — usually containing nicotine — into an inhalable vapor.

Thanks in part to its resemblance to a small computer flash drive, Juul has become popular with some teenagers as a discreet way to vape at school and in public. Parents, teachers and principals say they are struggling to control the booming trend.

“The bathroom is the main source of it,” said Maureen Byrne, the principal of Dublin High School near San Francisco. “As students become more comfortable, we have seen it in classrooms and on campus even out in the open.”

Health advocates have worried about the popularity of vaping products among kids and the potential impact on adult smoking rates in the future. A recent government-commissioned report found “substantial evidence” that young people who use e-cigarettes are more likely to try cigarettes.

FDA Commissioner Scott Gottlieb said the current “blitz” targeting Juul will continue through the end of the month, with additional actions in coming weeks.

“This isn’t the only product that we’re looking at, and this isn’t the only action we’re going to be taking to target youth access to tobacco products, and e-cigarettes, in particular,” Gottlieb said in an interview. He named several other brands of concern, including KandyPens and myblu.

Juul sales have exploded over the past two years, accounting for 55 percent of the U.S. market for e-cigarettes, according to recent industry figures. That’s up from just 5 percent of the market in 2016.

The San Francisco-based company said in a statement it agrees with the FDA that underage use of its products is “unacceptable.”

“We already have in place programs to identify and act upon these violations at retail and online marketplaces, and we will have more aggressive plans to announce in the coming days,” the statement read.

Juul Labs says it monitors retailers to ensure they are following the law. Its age verification system searches public records and sometimes requires customers to upload a photo ID.

E-cigarettes have grown into a $4 billion industry in the U.S. despite little research on their long-term effects, including whether they are helpful in helping smokers quit cigarettes.

That’s the sales pitch made by Juul and many other e-cigarette manufacturers: “Juul delivers nicotine satisfaction akin to a cigarette in a format that’s as simple and easy to use,” states the company’s website. A Juul “starter kit” can be ordered online for $49.99. The company’s website is intended to only sell to customers ages 21 and up.

Chaz Nuttycombe, an 18-year-old who has never tried vaping, says it’s prevalent at his school, Hanover High near Richmond, Virginia.

“They’re not doing cigarettes because that’s not really hip,” he said. “I think my generation has been educated on what’s in a cigarette, the poisons and whatnot.”

Research shows that many e-cigarettes contain trace amounts of chemicals like formaldehyde, but it’s unclear whether they exist at levels that can cause long-term health problems. Most researchers agree any risks of e-cigarettes do not approach the long-established harms of traditional cigarettes, which cause cancer, heart disease and lung disease.

The FDA gained authority to regulate e-cigarettes in 2016, but anti-smoking advocates have criticized the agency for not policing the space more aggressively to stop companies from appealing to underage users, particularly with flavors like mango, cool cucumber and creme brulee.

“These are very positive steps and demonstrate that FDA recognizes the problem of youth use is very serious,” said Matthew Myers, of the Campaign for Tobacco-Free Kids. “But they don’t address the biggest issue that the FDA is not been enforcing its own rules.”

Myers’ group contends that Juul and several other e-cigarette companies have recently launched new flavors and varieties without seeking FDA authorization. That step is mandatory under the FDA regulations put in place during the summer of 2016.