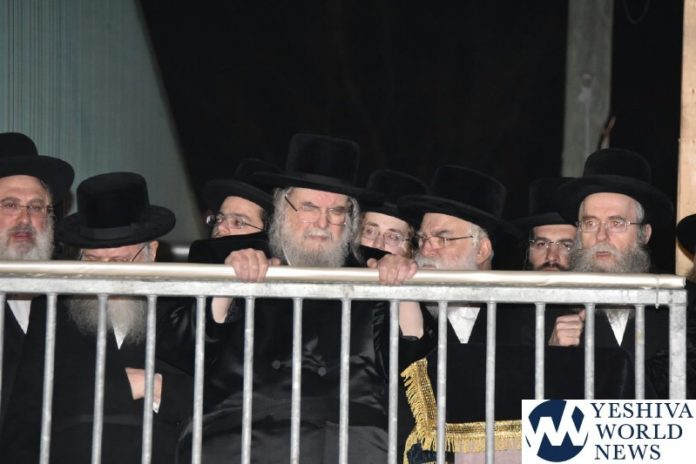 The following are some excerpts from various articles, so the YWN readership can see how the Canadian media outlets are covering the historic visit of the Belzer rebbe to Montreal:

Red carpets, dancing crowds, bonfires and street celebrations are some of the ways Montreal’s Belz orthodox Jewish community have marked a rare visit by their spiritual leader over the past several days.

The visit began with a welcome ceremony on Tuesday and ended Saturday night when a large crowd attended a midnight procession last night to honour Rabbi Yissachar Dov Rokeach, who is visiting the city for the first time in two decades.

Over the past week, the rabbi has been given a rock star-like greeting as large crowds have gathered to catch a glimpse of the long-serving spiritual leader, who has led the community since 1966.

Members of Montreal’s Belz orthodox Jewish community are wrapping up several days of festivities to mark a rare visit by their spiritual leader.

A large crowd attended a midnight procession last night to honour Rabbi Yissachar Dov Rokeach, who is making his first visit to the city in two decades.

He says the organizers have made efforts to minimize traffic disruptions in order to avoid the tensions that have flared in the past between the Hasidic community and some of their non-Jewish neighbours.

Prayers, festive dances, songs, bonfires, pastries and pizza for children: thousands of people from the Jewish community celebrated the Lag Ba’omer party last night in Montreal. A moment made even more important this year due to the visit of Rabbi Yissachar Dov Rokeach, spiritual leader of the Belz community.

“It’s a lame analogy, but it’s as if Cristiano Ronaldo was here to party with us,” says Dou Dou Dahan, a Montreal restaurant owner. It’s an honor to have it. It is impossible to overestimate the importance of this rabbi, not only for the Belz Hasidic community, but for all Jews. There are 2.5 million people in Israel celebrating this holiday right now. ”

The party was held in an old industrial district on Hutchison Street, between Beaubien and Atlantic Streets, at the north end of Outremont, near the boundary with Parc-Extension. Firefighters from the Montreal Fire Department as well as SPVM cycling officers were on hand to ensure the safety of the event.

VIDEOS/PHOTOS: Thousands of chassidim escort the Belzer Rebbe from Tisch to his host's house, as the historic Shabbos in #Montreal came to an end 📸🎥 מסע הקודש בעלז

TIME-LAPSE: Thousands of chassidim escort the Belzer Rebbe from Tisch to his host's house, as the historic Shabbos in #Montreal came to an end 🎥 מסע הקודש בעלז

PHOTOS: The Belzer Rebbe on a private jet for a historic trip to #Montreal

VIDEOS/PHOTOS: The #Belzer Rebbe has arrived in #Montreal to begin the historic visit

WATCH: Motorcade of the Belzer Rebbe seen in #Montreal