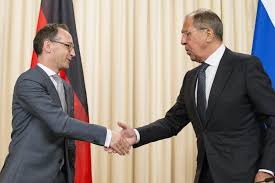 Russia and Germany say efforts must be taken to preserve the nuclear deal with Iran following the U.S. exit.

German Foreign Minister Heiko Maas said after Thursday’s talks with his Russian counterpart Sergey Lavrov that they agreed that it’s necessary to search for ways to preserve the 2015 agreement disavowed by U.S. President Donald Trump.

Maas noted it’s important that Iran continues to abide by the deal, adding that he discussed how Moscow could encourage Tehran to do that.

Maas, who was on his first trip to Moscow, said it’s important to maintain a frank and constructive dialogue with Russia despite differences. At the same time, he was critical of Moscow’s response to an ex-Russian spy’s poisoning in Britain and raised the issue of Russian hacking attacks.