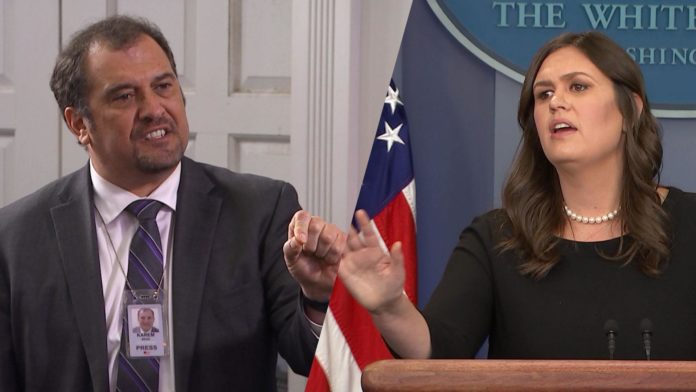 CNN contributor Brian Karem yelled at White House Press Secretary Sarah Sanders during a briefing about the practice of separating immigrant children from their families as a deterrent.

“Our administration has had the same position since we started on day one, that we were going to enforce the law,” Sanders told reporters, unfazed. “I know it was something that wasn’t high on the priority list in the previous administration but it is on ours.”

“We’re a country of law and order and we’re enforcing the law and protecting our borders. We would like to fix these loopholes and if Democrats want to get serious about it instead of playing political games, they’re welcome to come here and sit down with the president and actually do something about it,” she added.

That’s when Karem jumped in.

“Settle down. I’m trying to be serious but I’m not going to have you yell out of turn,” Sanders replied.

“These people have nothing,” he persisted.

“I know you want to get some more TV time but that’s not what this is about,” Sanders said.

“Honestly, answer the question,” Karem insisted. “It’s a serious question. They have nothing, they come to the border with nothing, and they throw children in cages. You’re a parent. You’re a parent of young children. Don’t you have any empathy for what they go through?”

SHS seems upset. Her evening with her children disturbed. So @PressSec do you have any empathy for those less fortunate whose children are ripped from them and then are caged? https://t.co/kpFVA1oiyQ