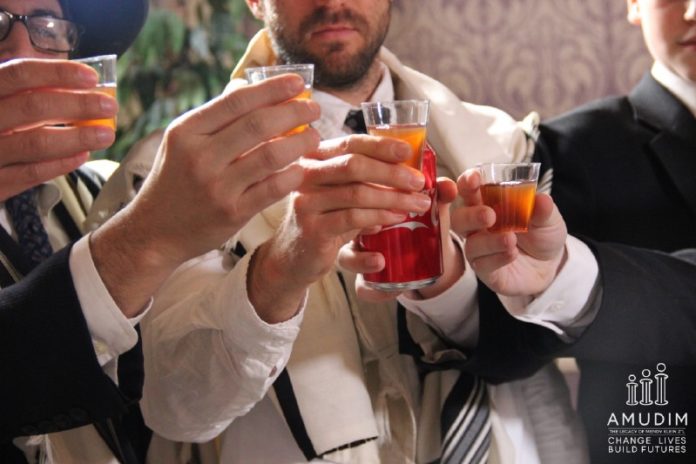 The Alcohol Keeps On Flowing

Baruch Hashem, I had the zechus of spending a wonderful Succos with my family in the most beautiful place in the world: Yerushalayim.  While it was a truly remarkable and uplifting experience in so many ways, it was sadly tarnished by certain behaviors that I witnessed over yom tov.

As I walked with my wife and children to and from meals over Succos, I could not believe the amount of drinking that was going on by the many students, both boys and girls, who are spending a year (or two or three) in Eretz Yisroel.  They were being liberally supplied with drinks at meals and kiddeishim, and I cannot even begin to tell you how many of them I heard speaking openly about the amount of alcohol they had enjoyed, identifying the various bottles by brand, year and price.  Some of the kids I saw had had so much to drink that they were literally stumbling over their own two feet trying to make their way home.

And that was before we even got to the second days of yom tov.

The drinking that I just described all took place before Shemini Atzeres and Simchas Torah rolled around.  Things were exponentially worse on the last days of yom tov, particularly when it came to those who don’t live in Eretz Yisroel who found themselves facing a 48 hour drinking bonanza. First they got plastered on Shemini Atzeres, joining Israeli shuls and families who were also celebrating Simchas Torah on the same day.  Then they enjoyed an encore alcohol binge on the next day, joining foreigners for their Simchas Torah celebrations and, once again, getting completely and totally bombed.

But wait, it gets worse. There was one location where well meaning individuals set up second day minyanim for the chutznikim, but there was no supervision whatsoever.  From that site alone there were over 25 students who were so drunk that they were rolling around on the floor.  Six more kids from that location ended up hospitalized, two of whom had to have their stomachs pumped because they had alcohol poisoning.

It goes without saying that not every young adult who goes to study in Eretz Yisroel engages in this kind of destructive behavior.  I witnessed beautiful yom tov celebrations at both Rabbi Senter and Rabbi Fisher’s yeshivos; there was zero alcohol present, just true simcha that emanated from the hearts of everyone present as they experienced the pure joy of yom tov. I have no doubt that there were many other sober events throughout Eretz Yisroel and I applaud everyone who participated in those as well.  But there is no question that there were way too many events where the alcohol flowed freely and multiple friends who spent Succos in different neighborhoods in Eretz Yisroel told me that they had seen exactly the same type of drinking that my family and I witnessed.

I wish I had all the answers to problems like these, but I don’t.  Still, I know that what I saw in Yerushalayim is simply not acceptable and we all need to work together to put an end to this situation before more lives are ruined or worse.  No matter what country or neighborhood you find yourself in, if you are a responsible adult, be it the head of an institution or simply someone who wants to invite young adults for a meal or for a simcha, I urge you to do the right thing and to refrain from serving alcohol to your minor guests.

It is also important to remember that the burden of responsibility for the excessive drinking by young adults in Eretz Yisreol falls upon many sets of shoulders.  The yeshivos and seminaries to whom we entrust our children must not look away from these problems and must take a firm proactive stance on these issues.  The well meaning baalei batim who invite our children to their tables need to understand that they have no business allowing students to consume alcohol in their homes.  We parents also need to be well aware of the many opportunities for destructive behavior that exist when our sons and daughters are spending a year or more away from home and we need to make sure that they are equipped to face those dangers responsibly, no matter how tempting they may seem or what their peers are doing.

Finally, it is important to remember that children mimic the behaviors that they see around them which means that adults need to drink responsibly.  Hoping to further that goal, Amudim has been promoting the concept of having a designated adult shomer in charge of all alcoholic beverages at every simcha, event or kiddush.  That person would make sure that all alcohol is kept in a single location, would pour all drinks to anyone of legal drinking age and would refuse alcohol to anyone who has had one too many.  We are confident that by introducing measures to eliminate unsupervised access to alcohol we can drastically reduce the number of young adults who find themselves addicted, a situation that can have fatal consequences.

As a frum community, we need to remember that we are not immune from the problems that plague the outside world.  Unfortunately, we are seeing more and more how alcohol, and yes drugs, are destroying lives all around us, shattering families and inflicting unspeakable damage.  The time has come for us to take a strong stance against these problems – not only do we need to demand accountability to those who are entrusted with the care of our children, but we also need to require the same level of stringency from ourselves.

Nothing is more precious than our kids.   The time to stand up for them and to protect them from harm is NOW.

Zvi Gluck is the director of Amudim, an organization dedicated to helping abuse victims and those suffering from addiction within the Jewish community and has been heavily involved in crisis intervention and management for the past 19 years.  For more information go to www.amudim.org.