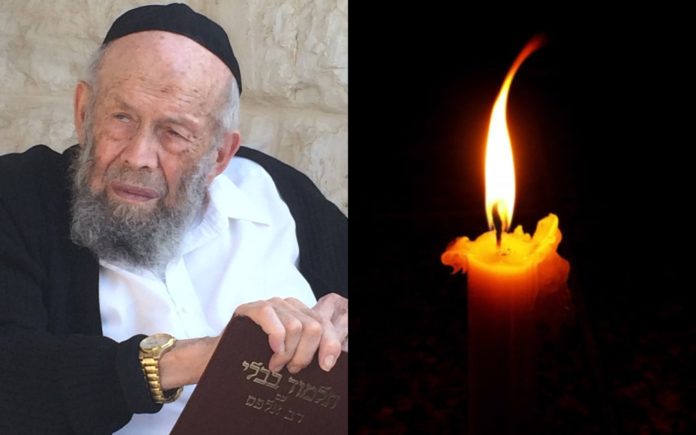 YWN regrets to inform you of the passing of Rav Eliyahu Pesach Rominek, Rosh Yeshiva of Yeshiva Ohavei Torah in Far Rockaway.

Rav Rominek was a Marbitz Torah for more than seventy years. He was initially a talmid of Rav Yitzchok Hutner z”tl in Chaim Berlin. He then learned in Lakewood’s Bais Medrash Govoah, becoming one of the earliest and foremost talmidim of Rav Ahron Kotler z”tl.

In 1949, Rav Rominek returned to Chaim Berlin and became a R”M in the Bais Medrash throughout the 1950’s and 1960’s. He also was the Rav of the Young Israel of Laurelton, Queens throughout the community’s existence, until 1975. Through his efforts, many of his Mispallelim raised Torah-true families.

In 1949 he married his Rebbitzen, Hadassah Wohlgelernter, daughter of Rav and Mrs. Shalom Pinchus Wohlgelernter zt”l of Seattle.

In 1975 they moved to Far Rockaway where Rav Raminek founded his Yeshiva for post-Yeshiva adults. For decades, he gave shiurim throughout the week to young and old. His pre-Yom Tov Shiurim, given in the various shuls in the community, were the highlight of many people’s Yom Tov preparation. The advanced level of his shiurim elevated the community as a whole.

As one the senior Rabbanim of the community, many of the important Shailos were brought to him. He was also known outside of these communities for his successful efforts to free young girls from the tyranny of Kedushei Ketana. He was well-respected and communicated with many of the Gedolim in America and Eretz Yisroel regarding this and many of the other issues of the day.

The Levaya will take place Tuesday morning at 9:30 am in the Yeshiva of Far Rockaway, the place where he gave many shiurim, located at 802 Hicksville Road, Far Rockaway, NY.