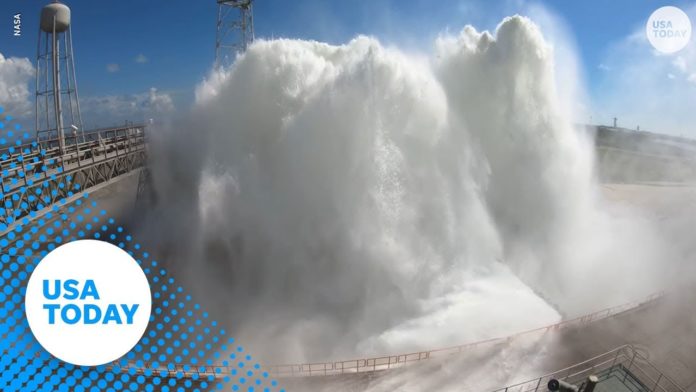 Who knew rocket launches might require so much water?

As part of the preparations for its new Space Launch System, NASA tested the water deluge system, which includes shooting 450,000 gallons of water on to the launch pad at Kennedy Space Center.

NASA posted a video of the Oct. 15 test to YouTube on Friday.

According to NASA, the water deluge system is used to reduce extreme heat and energy generated after a rocket launch.

The Space Launch System is basically a giant rocket NASA will use in a series of missions traveling to the moon and Mars.

The system is designed to carry larger payloads and generate more energy, which could open the door to deep space missions “including robotic scientific missions to places like Mars, Saturn and Jupiter,” said NASA.

Exploration Mission-1, the first mission to use the Space Launch System, will serve as a test for the system and the new Orion spacecraft, built to carry astronaut crews on deep space missions. It is expected to launch in June 2020.