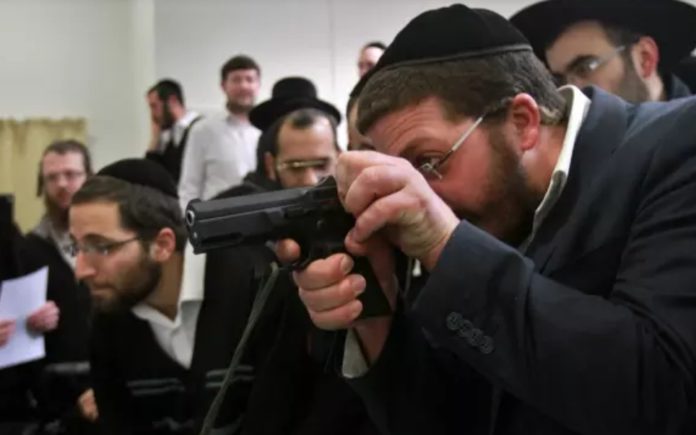 The horrific tragedy in a conservative synagogue in Pennsylvania Shabbos morning that left eleven people dead should cause us, perhaps, to rethink the manner in which we observe a certain halacha.  It is not that halacha should change.  Rather, changing circumstances leads us to the application of different aspects of halacha. There is a surge in anti-Semitism happening now, and this creates new realities in Shuls, schools, and Yeshivos.

[RELATED – WATCH: Trump: If Pittsburgh Synagogue Had An Armed Guard “They Would Have Been Able To Stop” The Shooter]

The Talmud (Brachos 54b) tells us that Tefillah, prayer – lengthens a person’s life.  A long knife or sword, on the other hand, shortens a person’s life.  The Orchos Chaim cites the Maharam of Rottenberg that based upon this dichotomy, a Jew should not bring a sword or long knife into shul.  The Shulchan Aruch (OC 151:6) rules in accordance with this view, although some Poskim have stated that this ruling of the Shulchan Aruch is really more of a piece of ethical advice rather than Psak Halacha.

The Gemorah in Sanhedrin (82a) cites the fact that Pinchas arose from the congregation and he took a spear in his hand.  The Gemorah explains that from here we see that a weapon is forbidden in the Beis haMidrash.

The question is, does the current situation warrant that a number of responsible and well-trained members of shuls and administrators in Yeshivos should, where it is legal, arm themselves with guns at this point?

This author believes that it should.

First and foremost, the issue of Pikuach Nefesh supersedes the halacha of not bringing a weapon into shul.  The Torah tells us v’chai Bahem – and we shall live by the Torah – not die by them.

Secondly, having armed individuals in shul can save lives, and saving life is a fundamental Mitzvah.  What is the source of this Mitzvah?  The verse in Parshas Ki Taytzai (Dvarim 22:2) discusses the Mitzvah of Hashavas Aveida – returning an object with the words, “Vahashaivoso lo – and you shall return it to him.”  The Gemorah in Sanhedrin (73a), however, includes within its understanding of these words the obligation of returning “his own life to him as well.”  For example, if thieves are threatening to pounce upon him, there is an obligation of “Vahashaivoso lo.”  In other words, this verse is the source for the Mitzvah of saving someone’s life.  It is highly probable that it is to this general Mitzvah that the Shulchan Aruch refers to in Shulchan Aruch Orech Chaim 325.

There is a negative Mitzvah of not standing idly by your brother’s blood as well.  This is mentioned in Shulchan Aruch (CM 426:1) and in the Rambam.  Collectively, if we adopt such a policy in having armed people in every Beis Midrash in Eretz Yisroel, we can ensure that we do not stand idly by our brother’s blood.

The Sheiltos (Sheilta #37), based upon the Gemorah in Bava Metziah 62a,  understands these words to indicate an obligation to save others with you.  The Netziv in his He’Emek She’ailah understands it as a full-fledged obligation according to all opinions. He writes that he must exert every effort to save his friend’s life – until it becomes Pikuach Nefesh for himself.

The Ramban, Toras haAdam Shaar HaSakana (p42-43) understands the verse of “And love thy neighbor as yourself” as a directive to save him from danger as well.  Although he discusses the issue of medical danger, it is clear that this is an example, and it would apply to danger from physical enemies as well. Even without the Ramban, however, it is clear that defending and protecting someone from danger is a fulfillment of this Mitzvah.

There are authorities (Rabbeinu Peretz, TaZ 151:2, and Eliyahu Rabbah 151:10) that write that the halacha is limited to a long knife or a sword that cannot be covered.  If it is a smaller and coverable knife, these Poskim are lenient.  It would seem that a handgun may be similarly covered and thus would not present a problem according to these authorities.  And while this may be a minority view, when dealing with issues of danger to life, one may rely upon minority opinions.

Both Rav Eliezer Waldenburg (Tzitz Eliezer Vol. X #18) Rav Ovadiah Yosef (Yechave Daas Vol. V #18) rule that Israeli soldiers may hold on to their guns in shul when necessary.  The idea presented here is merely an extension of that ruling in light of the new dangers in this Intifada.

Just like we have fire exits in this country, the hanhallah of our Mosdos should consider making sure that there are responsible and adequately trained staff members or Kollel members that are both present and armed.  There should be an armed presence 24 hours a day.

From a theological perspective, we have perhaps entered what Chazal term as an, “Idna d’rischa.”  One of my Rebbeim, Rav Dovid Kviat zt”l once explained that there are two manners in which Hashem judges the world.  He judges with both Midas HaDin – the attribute of Strict Judgement and with Midas HaRachamim – the attribute of Mercy.

Generally speaking, Hashem judges us with Midas HaRachamim.  However, there are times in Jewish history known as an idna derischa – periods of Divine Anger.  The Gemorah in Menachos (43a) tells us that generally Hashem does not punish people for abnegating a Mitzvas Assei – a positive Mitzvah in the Torah.  We are only punished for violating negative prohibitions.  However, in a period of Divine Anger, we are punished for negating positive Mitzvos too.

Rav Kviat zt”l explained that there is an idea found in Sefer Dvarim (31:18) of “Hester Panim”, where Hashem, so to speak, hides His face. “I shall surely Hide My Face on that day..”

In an idna derischa, Hashem ceases to judge with Midas HaRachamim – He judges instead with Midas HaDin.  Midas HaDin is almost unfathomable to the mortal mind in terms of its sheer strictness.  No one wishes to be judged with the Midas HaDin.

What Hashem did during the holocaust, a period of idna derischa, was to invoke the idea of Hester Panim – where He hid Himself.  Hitler and his Nazis y”s could use their freedom of choice here because it was an idna derischa and there was Divine Hester Panim.  The Hester Panim, however, is limited to the point of Midas HaDin.

With such dangers facing Klal Yisroel, we must take steps to ensure the safety of our shuls and Bnei Yeshiva in whatever way we can.  This recent tragedy brings this idea home.  Eleven dead is a huge and tragic number. It goes without saying that it should never involve breaking the law, and it should be done with the cooperation of the local police departments.

May Hashem bring yeshuos and nechamos to His nation and end this period of Divine Anger.