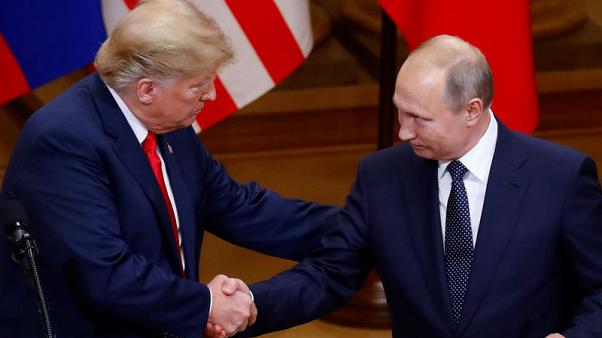 Bolton said “we have invited President Putin to Washington after the first of the year for, basically, a full day of consultations.” He said no date has been set yet.

Bolton spoke on a trip to the ex-Soviet nation of Georgia, which fully lost control over its two separatist provinces after losing a brief war with Russia in 2008.

Bolton noted that Putin and U.S. President Donald Trump are set to meet in Paris when they attend Nov. 11 events marking 100 years since Armistice Day.

Russian Foreign Minister Sergey Lavrov had a call with U.S. Secretary of State Mike Pompeo to discuss “acute issues on the international agenda and bilateral ties in the context of preparations for planned contacts between the presidents,” the ministry said in a statement.

Putin and Trump held a summit in Helsinki in July amid sharp differences over the Ukrainian crisis, the war in Syria and the allegations of Russian meddling in the U.S. 2016 presidential election.

In the wake of the summit, Trump was widely criticized for failing to publicly denounce Russia’s interference in the 2016 U.S. election and appearing to accept Putin’s denials of such activity.

Days after the Helsinki meeting, Trump asked Bolton to invite Putin to Washington in the fall but the invitation further fueled controversy and the invitation was quickly pushed back until next year.

Putin has repeatedly said that improvements in U.S.-Russian ties have been thwarted by U.S. political infighting, but voiced hope that Trump could eventually move to repair the fractured relations. Earlier this month, the Russian leader said “playing the Russian card” was a convenient instrument in U.S. politics ahead of the midterm election in November.