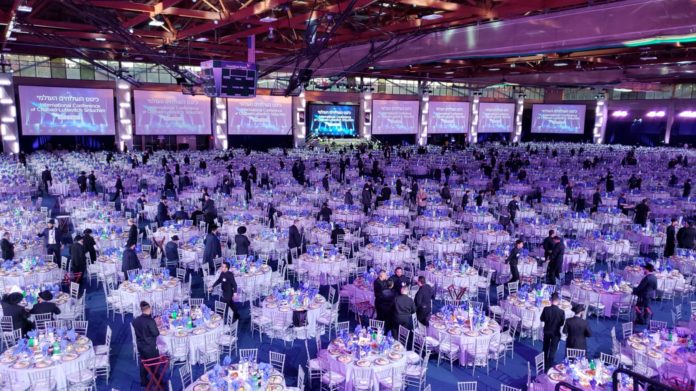 This year, for the 14th year on YWN, tens of thousands of viewers from around the world will be able to view the International Kinus HaShluchim banquet live on a broadcast made possible by the organizers of the Kinus. The live streaming webcast begins at 5:30PM on Sunday, Nov. 4, and is taking place in Rockland County, NY.

The highlight is always the traditional roll call of countries and regions which is followed by spirited dancing.

As we have for more than a decade, YWN will be bringing you thousands of photos, as well as extensive video and photo coverage from the massive event.

The Shluchim will gather for the gala dinner – intended to reinvigorate and inspire them before returning to outposts around the world – that will include an international roll call and spirited dancing. The dinner, which will be attended by more than 5,600 rabbis and communal leaders, has outgrown New York City venues, and this year will be held at the Rockland Community College in Suffern, more than an hour from Brooklyn. It has previously been held in various New York City locations, including armories, hotels and piers; last year, it took place in a massive warehouse in Bayonne, N.J.

Organizers note that the search for a venue gets harder and harder each year, but they like it that way—after all, growth is good.

WATCH: A group of VIPs heading to the #Chabad Kinus Hashluchim on a private jet