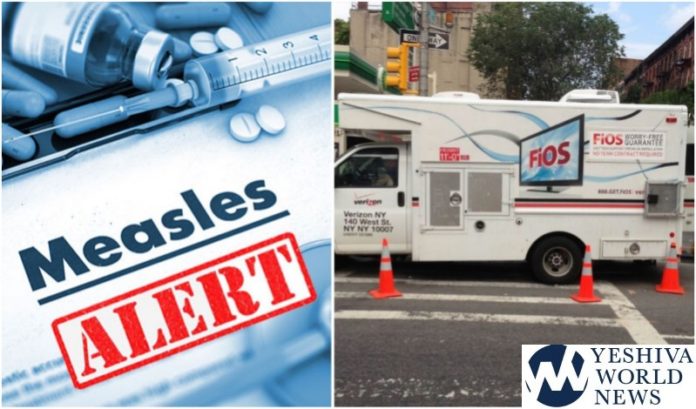 Verizon will not be servicing customers in Boro Park, due to the measles outbreak.

According to exclusive audio obtained by YWN, a phone provider in Boro Park spoke with Verizon on Monday morning about why they are cancelling requests for tech support.

Verizon is heard telling the customer that they will be crediting their account for all the time that a technical person will be unable to be dispatched due to the measles outbreak.

“You have no information when you will be sending techs to Boro Park?”, Verizon was asked.

“Not that I am aware of”, the Verizon rep responded.

“The only thing I can do is to reach out to the dispatch center and see if they have a date or know of any information when it may get cleared up”.

YWN notes that the location that a tech person is needed is not a school, but an office in Boro Park.

YWN mentions the school aspect, because last week, the NYC Health Department banned all unvaccinated children from Yeshiva in Boro Park, Williamsburg and parts of Flatbush. Click here to read what zip codes this ban has been placed on.

Just a few days ago, YWN spoke with Dr. Jane R. Zucker, the Assistant Commissioner for the Bureau of Immunization at the NYC Department of Health who said that there are now 39 confirmed cases. All of the cases are in Brooklyn – 15 of them are in Williamsburg, 21 are in Boro Park, 1 in Bensonhurst, 1 in Marine Park.

“Besides for five cases being adults, the rest are all children under the age of five, Dr Zucker told YWN”.

Dr. Zucker told YWN that they suspect there are many additional cases that have not been properly reported.