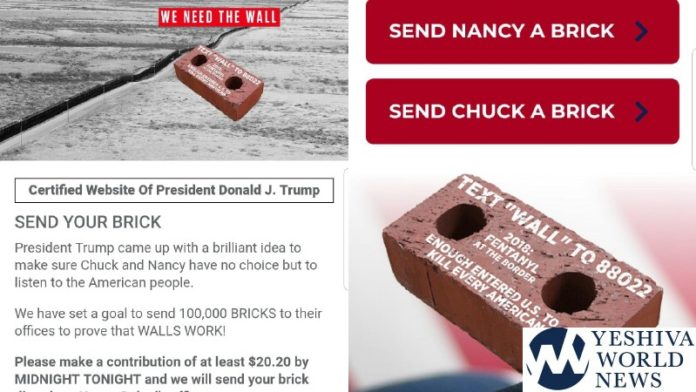 President Donald Trump has come up with a new idea to make sure Sen. Chuck Schumer and House Speaker Nancy Pelosi have no choice but to agree to his border wall plan.

The following message was circulated by the Trump campaign on Friday afternoon:

We have set a goal to send 100,000 BRICKS to their offices to prove that WALLS WORK!

Weeks after the Democrats began stonewalling President Trump in his fight to secure our border, the American people now have a chance to send a clear message to Democrat leaders Chuck Schumer and Nancy Pelosi about the need to build the wall.

Starting today, Donald J. Trump for President, Inc. is offering red faux bricks to be sent to Senate Minority Leader Chuck Schumer (D-NY) and House Speaker Nancy Pelosi (D-CA) in exchange for a campaign contribution in the amount of $20.20 each. The bricks will be printed with facts about the need for border security and an appeal to “TEXT ‘WALL’ to 88022.”

“The Democrats have been stonewalling President Trump for too long, as the President remains fully committed to make a deal to secure our border,” said Brad Parscale, Campaign Manager for Donald J. Trump for President, Inc. “Now the American people can send a message directly to Chuck and Nancy on a faux red brick that tells them to build the wall. Because they clearly don’t understand the facts about the critical need for a wall and border security, our bricks will teach them the truth about the crime, drugs, and human trafficking that result from open borders. Since Chuck and Nancy keep stonewalling the President, we’ll send the wall to them, brick by brick, until they agree to secure the border.”

Chuck and Nancy need a reminder that there is a MASSIVE crisis on our southern border. Send a BRICK to their offices to tell them WE NEED THE WALL! https://t.co/azKOV6MlLN#MAGA #BuildTheWall #Trump #TeamTrump