An Orthodox Jewish family vacationing in Miami claims American Airlines kicked them off their flight due to complaints about their body odor, Local10 News reported.

“There’s no body odor that we have,” Yossi Adler said Thursday morning at Miami International Airport. “There’s nothing wrong with us.”

Adler, his wife and their 19-month-old daughter were preparing to fly back home to Detroit on Wednesday night when they were escorted off their American Airlines flight.

“All of a sudden, as soon as they took us off, they closed the gate and then they said, ‘Sorry, sir, some people complained you had body odor and we’re not letting you back on,'” Adler recalled.

The Adlers said they were told their luggage would be taken off the plane, but that didn’t happen, leaving them with only the clothes on their backs.

“They have our car seat, stroller, everything,” Jennie Adler said.

American Airlines sent a statement to Local 10 on Wednesday night acknowledging the reason for their removal.

“Mr. Adler and his wife were removed from the flight when several passengers complained about their body odor,” the statement said. “They have been booked into a hotel for the night and given meal vouchers. They have been rebooked on a flight Thursday.”

The age-old anti-Semitic stereotype that Jews are dirty and stink. Why @AmericanAir would acquiesce to this abhorrence in 2019 is beyond me. https://t.co/FUeQdladia

The Adlers returned to Miami International Airport early Thursday in hopes they would be able to fly home.

“We stopped several people in the airport and, it’s embarrassing, but we asked them, ‘Do you think we smell? Because we just got kicked off a plane for smelling,” Jennie Adler said.

Yossi Adler said he’s frustrated and wants to know the real reason they were forced off the plane.

“I want them to own up to what really happened and to tell me the truth,” he said. “What was it?”

The Adlers later sent a text message acknowledging that they took off back to Detroit. They said they’re hopeful they can find their luggage when they get there. 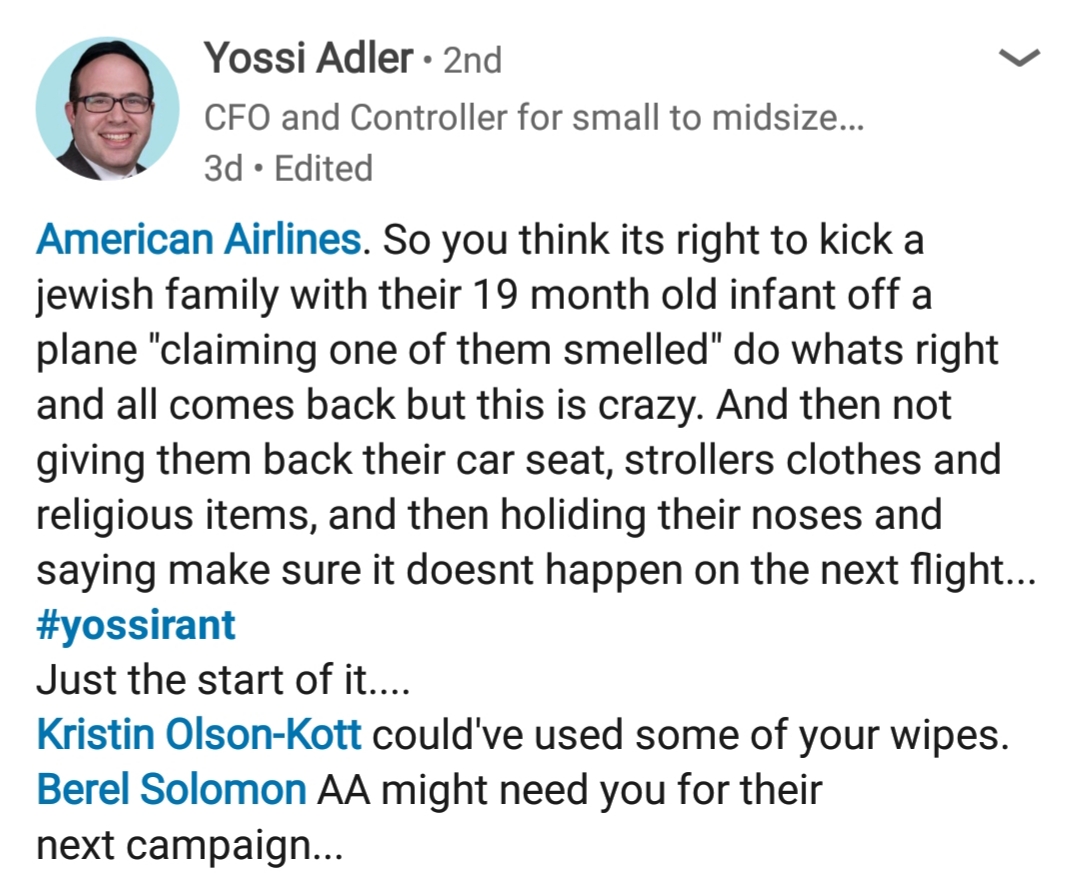