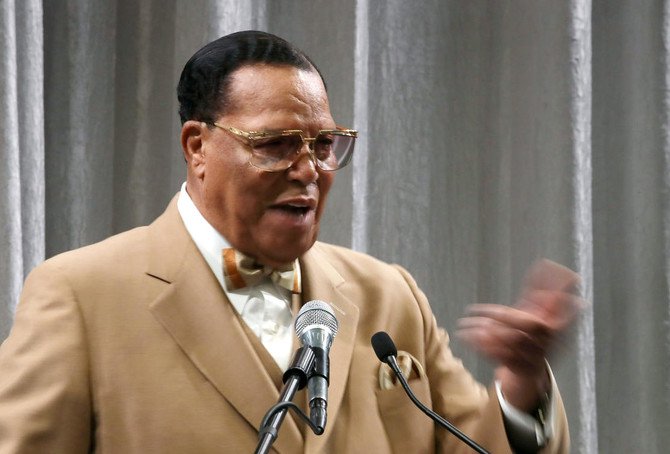 Louis Farrakhan and the Nation of Islam teamed up with a Holocaust denier and anti-Semitic ideologue to attack the Jewish religion and blame numerous ills of modern society on Jews, during the keynote event at the Nation of Islam’s annual Saviours’ Day conference in Chicago.

Speaking before a crowd of several thousand at the United Center and an unknown number on a livestream, Farrakhan was preceded by Michael A. Hoffman II, who suggested that ancient Jewish texts are equivalent to teachings “from the church of satan.” Hoffman is a well-known Holocaust denier who has denounced belief in the “fake homicidal gas chambers of Auschwitz-Birkenau,” though he did not reiterate those beliefs at this event.

When he took the podium, Farrakhan unleashed a torrent of attacks on Jews, claiming that anti-black racism “was started by Jewish rabbinical leaders” in ancient times, and that Jewish racism towards Africans is ultimately responsible for the “enslavement… colonization…dehumanization…[and] denial of self-determination” to black people throughout history.

Farrakhan based much of his mischaracterization of Judaism on a distorted reading of the Talmud, an ancient compilation of legal and ethical debates among rabbis. Attacks on the Talmud were first instigated by Christian and Muslim polemicists in the early Middle Ages, and have become a staple of extreme anti-Semitic ideologues. Farrakhan claimed that Talmud created “the poisonous belief that justified and guided the entire institution of the transatlantic slave trade and the continuous exploitation of our people.” He also attempted to sow ill will between Jews and African Americans by saying that “sharecropping can be traced to the Talmud.”

“These are NOT the TRUE Jews! These are Ashkenazis who use the Talmud NOT the Torah. Sharecropping can be traced to the TALMUD! #SD19CHI #Farrakhan pic.twitter.com/M6M6LZDcNC

“You have nothing to apologize for”, he told Omar, while condemning lawmakers who pressed her to apologize in the wake of the remarks.

Farrakhan reiterated classic anti-Semitic beliefs about Jews and money, claiming for example that Jewish principles “have exploited the American people through institutional usury and predatory lending practices.” He rehashed the tired cliché that the federal reserve is run by “a family of rich Jews.”

Farrakhan also blamed Jews for “pervasive rape culture…sex trafficking and prostitution,” and for emasculating black men. The latter theme was elaborated upon in an earlier speech by NOI official Brother Wesley Muhammad, who said that “Jewish genius had feminized the black male. The NOI is standing in between the demasculazination of the black man… this is why they hate Farrakhan.” Farrakhan outrageously claimed that ancient Jewish texts condone pedophilia, and that “pedophilia and sexual perversion exercises in Hollywood can be traced back” to Jewish religious texts.

Several times Farrakhan attempted to link current Israeli policy with his allegations against Jews and Judaism. When he attacked Jews for allegedly valuing the lives of their six million coreligionists who died in the Holocaust over the lives of all the other non-Jews on the planet, he added, “That’s how cheap they think of Palestinian life. The life of the gentiles. Only their life is sacred.”

Later in the speech he referred to Israel’s effort to come to grips with an influx of refugees from Africa, saying, “Israel sees the black youth as a problem for them. Israel, a government after black youth. Well let me tell you something Israel, you’re making a very big mistake and you’re hastening your doom. You leave my black brothers and sisters alone because you fear what they’re gonna become because they listen to Farrakhan.”

Referring to the controversy over the struggles of Women’s March leaders Tamika Mallory, Linda Sarsour, and Carmen Perez to forthrightly condemn Farrakhan and his anti-Semitic bigotry, Farrakhan claimed that “the wicked Jews want to use me to break up the women’s movement.”

Farrakhan also claimed that “talmudic principles run the American jurisprudence system” and have informed the movement to create and maintain the right to legal abortion in this country. He described Margaret Sanger, who opened the first birth control clinic in the U.S. and established organizations that served as the precursors for Planned Parenthood, as a “so-called Jewish woman,” who “didn’t want black babies so she tried to get rid of as many as she could.” In fact, Sanger was of Irish Catholic extraction.