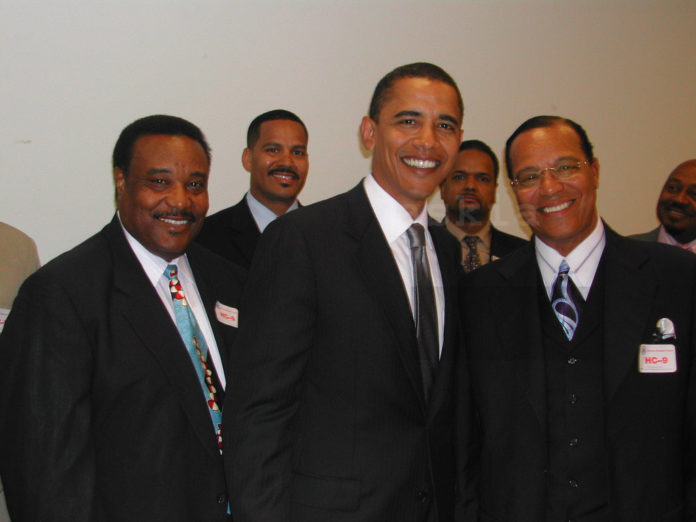 A photo of former President Barack Obama smiling with the Minister of the Nation of Islam, Louis Farrakhan, has surfaced thirteen years later.

The photographer, Askia Muhammad, said he took the photo during a Congressional Black Caucus (CBC) meeting in 2005, when Obama was an Illinois senator. He said he “gave up the picture at the time and basically swore secrecy.”

Muhammad believes if the photo had been released during Obama’s presidential campaign, “it absolutely would have made a difference.”

According to the ADL, Farrakhan has alleged that Jews were responsible for the slave trade and that they conspire to control the government, the media, Hollywood, and various Black individuals and organizations. He also frequently denies that Jews have a legitimate claim to their religion and to the land of Israel claiming that Judaism is a “gutter religion” and nothing more than a “deceptive lie” and a “theological error” promoted by Jews to further their supposed control over America’s government and economy.

Farrakhan claims Israel and Jews had a role in orchestrating the 9/11 attacks, stating “Israelis had foreknowledge of the attacks” and that Jews were warned ahead of time not to come to work that day.

Muhammad said a staff member for CBC contacted him “sort of in a panic.”

“I understood what was going on,” Muhammad told Talking Points Memo. “I promised and made arrangements to give the picture to Leonard Farrakhan (the minister’s son-in-law and chief of staff.)”

Also in the picture is Farrakhan’s son-in-law Leonard Farrakhan Muhammad, his son and security chief Mustapha Farrakhan, Minister Farrakhan’s son Joshua Farrakhan, and the Reverend Willie Wilson, executive producer of the program for Farrakhan’s Million Man March in 1995, and a chairman of the 20th anniversary.

Muhammad said he gave away “the disk” from his camera but “copied the photograph from that day onto a file” on his computer.

“Realizing that I had to give it up, I mean, it was sort of like a promise to keep the photograph secret,” Muhammad said.

Republicans have long argued the media gave Obama a pass on his alleged ties to Farrakhan during his 2008 presidential run, though Obama argued he had “thoroughly denounced” Farrakhan.

Harvard Law Professor and longtime Democrat Alan Dershowitz said he would not have campaigned for then-Sen. Barack Obama (D-Ill.) if he knew about the future president’s photo op with Louis Farrakhan.

Farrakhan is a “virulent anti-Semite and anti-American,” Dershowitz said on “Fox & Friends.”

“He has called Judaism a gutter religion. He is a horrible, horrible human being,” he said.

On @foxandfriends, @AlanDersh responded to a newly-unearthed photo from 2005 showing @BarackObama posing next to "anti-American" Minister Louis Farrakhan. https://t.co/5gKnJsgIJB pic.twitter.com/dfaKXyfNu5

Muhammad said he thought the CBC was concerned a photo with Farrakhan could hurt the young senator’s future presidential aspirations.

Muhammad added that Obama had Nation of Islam followers working in his Chicago senate office.

Dershowitz said he threatened to leave the Democratic Party if Rep. Keith Ellison (D-Minn.) – who once had connections with Farrakhan – was elected chairman instead of Tom Perez.

“We should have nobody in public office associating with a bigot like Farrakhan,” he said.