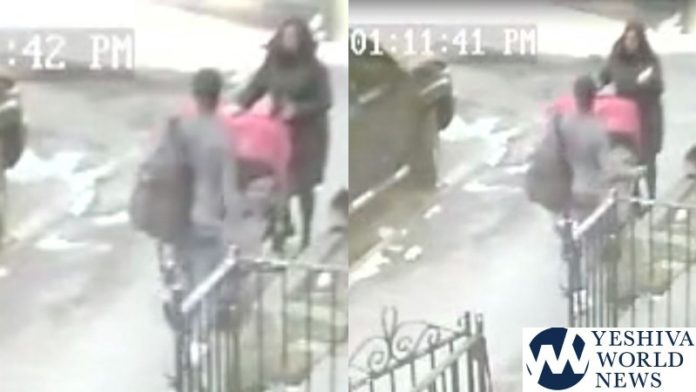 This disturbing incident occurred in Crown Heights on Monday afternoon.

A Shomrim spokesperson tells YWN that the incident happened on Sterling Street between Brooklyn and New York Avenues just after 2:00PM.

As you can see in the attached video taken from nearby security cameras, an African American male is seen walking down the street. Walking towards him is an Orthodox Jewish woman pushing a double carriage (with two children inside). In a totally unprovoked manner, the man does not walk to the side of the sidewalk, but instead walks into the carriage, lifts his foot and kicks the carriage.

The suspect nonchalantly walks away, without saying a word.

The stunned woman is seen taking out her phone as she attempts to take a photo of the man. She quickly contacts the NYPD and Crown Heights Shomrim, who are working closely on this incident.

If you have any information regarding this incident, please call the NYPD and then Crown Heights Shomrim at (718) 774-3333

WATCH: This person literally kicked a carriage pushed by an Orthodox Jewish woman in Crown Heights on Sterling Street on Monday afternoon – in a totally unprovoked. #NYPD investigating it as possible hate crime. pic.twitter.com/enDKc2tGqX