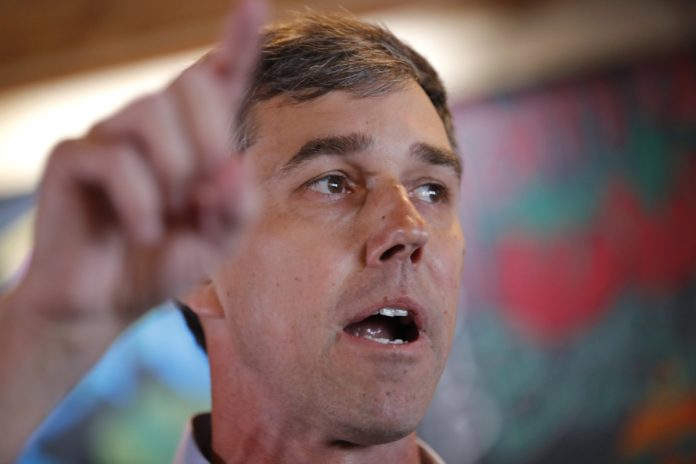 Democratic presidential candidate Beto O’Rourke told supporters Sunday that he’s never taken LSD and there’s “nothing” he hasn’t already revealed about his past that could come back to hurt his run for office.

The former Texas congressman — who has become known for his propensity for using the “f-word” — also promised again to clean up his language, despite breaking such past vows.

Speaking in front of a large map of Russia inside a coffee shop in Wisconsin’s capital, O’Rourke promised to return often, addressing concerns Democrats raised in 2016 after Hillary Clinton never campaigned in the state and lost there to Donald Trump by fewer than 23,000 votes.

“This state is fundamental to any prospect we have of electing a Democrat to the presidency in 2020,” O’Rourke said, adding that he was “really glad” Milwaukee was chosen to host the 2020 Democratic national convention. The city, which O’Rourke was visiting later Sunday, beat out Miami and Houston.

O’Rourke, of course, has to secure the Democratic presidential nomination before he can worry about the general election. But then he’s also already said he’d prefer to pick a woman as his running mate, should he make it that far. O’Rourke said Sunday that it was presumptuous to commit to that so early, but that doing so would make a “tremendous amount of sense” given the number of qualified women candidates.

Many remember the Texan for declaring “I’m so f–king proud of you guys” on national television during his concession speech in November, after narrowly losing his Senate race to incumbent Republican Ted Cruz. O’Rourke said Sunday that he’ll not use profanities any more, after being asked by a voter if he was going to “clean up his act,” especially in front of children.

“Point taken, and very strongly made,” O’Rourke said. “We’re going to keep it clean.” He made a similar pledge during his race with Cruz, then didn’t make good.

O’Rourke has previously admitted to a 1998 arrest for drunken driving and said nothing else will come out that could be used against him during the 2020 presidential campaign. Later, he signed the skateboard of a supporter who asked if he had ever taken the drug LSD. The candidate responded that he hadn’t.

About 400 people came to the coffee shop to hear O’Rourke. Half made it inside and half listened from the sidewalk through the opened door. O’Rourke wore a St. Patrick’s Day necklace featuring green cabbage but said he had coffee — not beer — with his breakfast: “Although it can be justified as an O’Rourke on St. Patrick’s Day to do that,” he joked, in a nod to his Irish heritage.

Other highlights of Sunday’s campaigning:

Kirsten Gillibrand formally joined the 2020 White House race on Sunday and previewed the hard line she will take against President Donald Trump by announcing a rally outside one of his signature Manhattan properties.

The New York senator had spent more than a month traveling around the country to gauge support for a run. Gillibrand’s announcement that she was joining the dozen-plus Democratic candidates seeking the White House came in a nearly three-minute video released early Sunday, when she says the national anthem poses this question: “Will brave win?”

She said her debut speech as a candidate will come this coming Sunday in front of the Trump International Hotel & Tower in New York.

Democratic Minnesota Sen. Amy Klobuchar is reacting to former Vice President Joe Biden’s “slip of the tongue,” when he suggested Saturday that he was already in the 2020 White House race — then quickly caught himself.

“He has been running things for a long time as a senator and then as vice president,” Klobuchar said on CNN’s “State of the Union.”

In a keynote speech at a Saturday dinner for the Delaware Democratic Party, Biden boasted that he has “the most progressive record of anybody running.”

Because Biden hasn’t announced whether he is running again for president, though, he followed up by saying “anybody who would run.”

The South Bend, Indiana, mayor said says he’s received contributions from 65,000-plus individual donors. That’s key because the Democratic National Committee said last month up to 20 candidates can qualify for debates in June and July by collecting donations from at least 65,000 individuals, with at least 200 unique donors in at least 20 states.

In an email to supporters on Sunday, Buttigieg said “we weren’t even close” to 65,000 donors when the DNC originally announced the requirement. The 37-year-old veteran says more than 76,000 people have now donated.