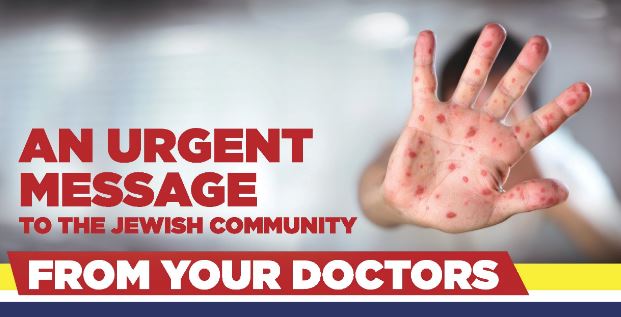 In what can only be described as unprecedented, over five hundred doctors representing numerous Jewish communities across North America have signed a letter confirming the need for all children and healthy adults to get immunized, according to the CDC schedule. This mass declaration by medical professionals, likely the first of its kind addressing the broad Orthodox Jewish communities nationally, directly and starkly calls out the dangerous falsehoods being spread by so-called anti-vaxxers.

The message reads:“We are aware of the dangerous misinformation campaign being spread and reject any unproven unscientific statements that contradict all available current science-based studies on vaccinations.”

What makes the statement that much more important is that it comes at a time when Jewish communities are battling not only the potential for a measles outbreak in their own backyards, but also the false perception that Orthodox Jews do not vaccinate. Indeed, statistics issued by the NYS and NYC Health departments confirm that in fact the overwhelming majority of Orthodox Jewish children are vaccinated, and the doctors in this letter are clearly aiming their unequivocal recommendations to the small percentage of people who have refused to inoculate themselves and their children from dreaded illnesses like measles, mumps, rubella and other diseases, at the expense of the larger community.

The letter is signed by recognized and trusted physicians from literally every medical specialty, and from various states including: New York, New Jersey, California, Florida, Texas, Arizona, Ohio, Illinois, Pennsylvania, Michigan, Missouri, Minnesota, Massachusetts, Wisconsin as well as Toronto and Montreal — calling on individuals and Jewish communities to work together to “prevent harmful diseases from spreading.” ‎

Rabbi Dr. Aaron Glatt, MD, a clinical professor at the Icahn School of Medicine at Mount Sinai and a highly respected physician and Rabbi in Long Island, was ‎asked why he felt it was important to be one of the original co-sponsors of this unprecedented effort and why over five hundred of his medical colleagues signed onto such a public declaration. Rabbi Glatt replied, “it is critically important for the Jewish world to know that the greatest poskim from all branches of Orthodox Jewry, as well as the greatest physicians (both number and quality) are in full agreement as to the Pikuach Nefashos imperative regarding measles vaccination.”

Everyone who is able to should receive their routine immunizations, which are safe and effective,” said Shmuel Shoham, an associate professor and infectious disease specialist at the Johns Hopkins School of Medicine, who signed the petition in a personal capacity. “Otherwise, there is real danger as we are seeing with measles right now, of diseases that were once all but eliminated in the U.S. coming back.”

Doctors and Askonim are also increasing efforts to inform adults in the wider community to check their own existing immunity levels, because many adults are under the impression that they are properly protected when in reality their childhood immunization may no longer be effective due to a wearing off of the vaccine. Doctors are fearful that this is a potential danger to thousands of unsuspecting individuals.

“With the measles outbreak now hitting communities like Detroit, and Baltimore and still very active in Rockland County and Brooklyn, the need to protect ourselves and each other has become of paramount concern” said Dr. Edward Bennett a popular emergency medicine physician from Queens and an original sponsor of the letter. Dr. Bennett continued, “people think they are in the clear because they were vaccinated as children but unfortunately we are seeing numerous cases of healthy adults born in the 1960’s, 1970’s and 1980’s who are now taking their titers test, a blood test to measure immunity, and coming back with negative immunity to one or more of the diseases. This requires an immediate booster shot.

“Bennett concluded, “checking your titers is something everyone can easily do and should be an immediate priority, especially if you are traveling.”

One prominent pediatrician with thousands of patients didn’t want to be named for fear of harassment by‎ extremist anti-vaxxers. He said “it is clear that the tide is now turning and after this public declaration letter, no longer will fringe elements be able to freely dismiss the peer reviewed and universally accepted positions of renowned medical experts in our own community. People should pay attention to the trusted medical professionals they have always turned to in times of medical crisis.”

YWN has learned that The Doctors declaration is being featured in a mass public information campaign with the participation of numerous media outlets and includes the launching of a new website www.DRSFORVAAX.ORG‎ that will provide viewers with an expanded Doctors list, location, credentials, specialties and updated and timely information on immunization.‎

CLICK HERE TO READ THE LETTER FROM THE DOCTORS 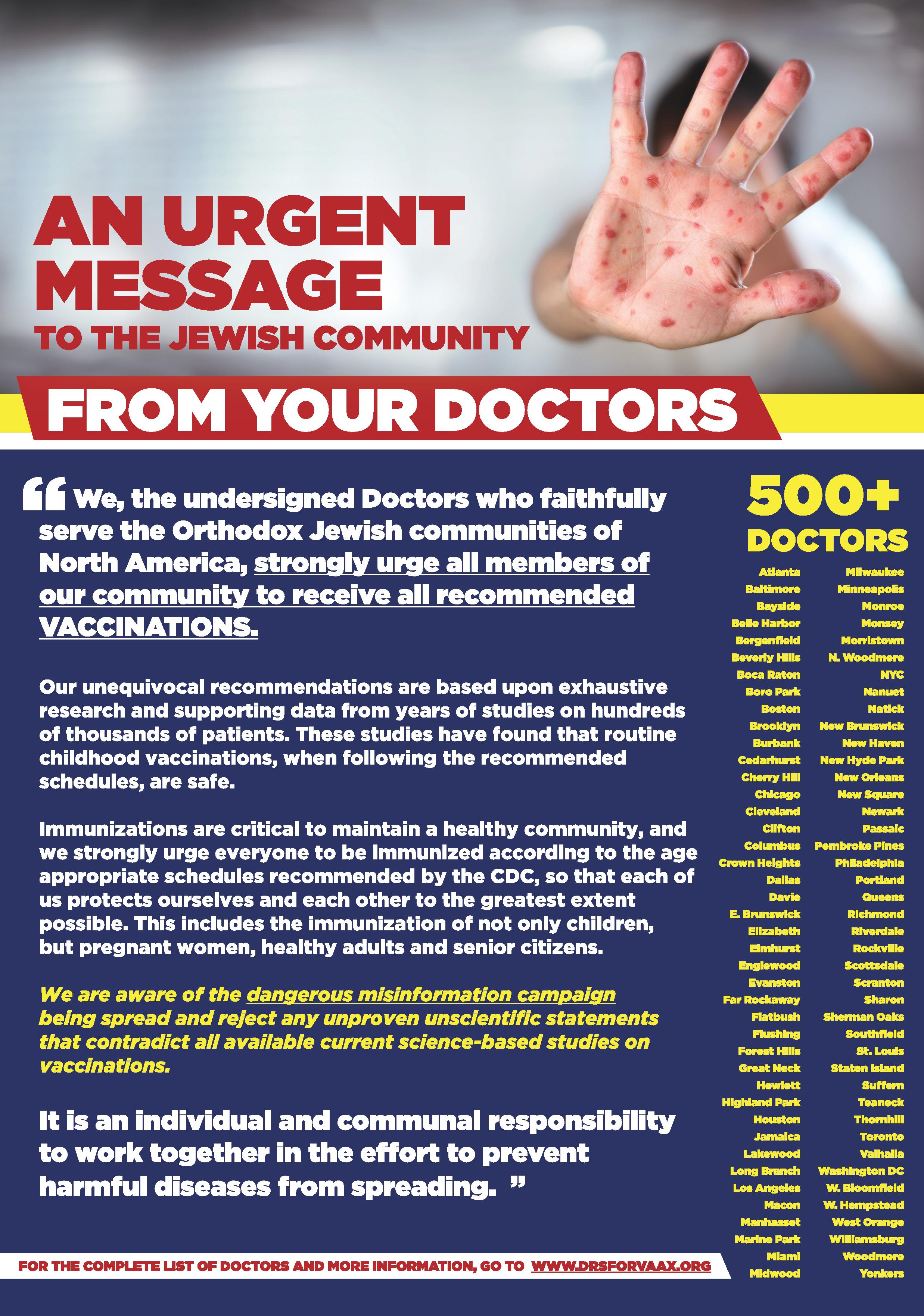 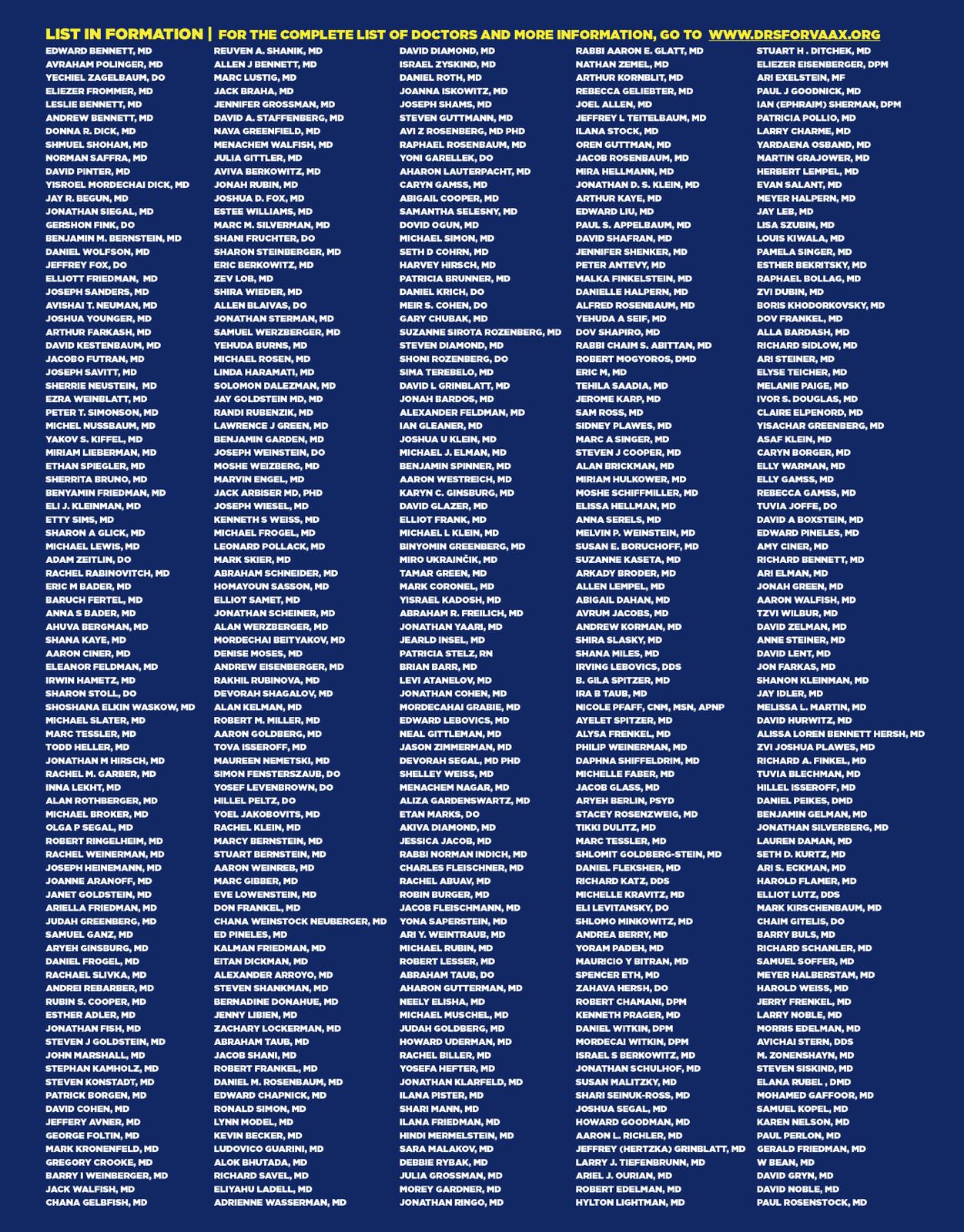 An unprecedented move, but a time-tested message: trust your doctors and vaccinate your child. It’s safe, it’s effective, it works. https://t.co/OmwacUMIh7

The consensus from the medical community is clear: #VaccinesWork. Powerful messages like these will help us get the facts out about the safety and efficacy of vaccines so we can end this #measles outbreak. @YWN https://t.co/bdFVNsGZrf

Powerful statement from 500+ doctors serving Jewish communities around NYC and beyond, with an urgent call for vaccination. This is exactly the kind of unambiguous messaging we need to push out if we are going to end the #measlesoutbreak. https://t.co/tlGz4r7umg pic.twitter.com/APLf4FLAP7

I thank all of the doctors and medical professionals who are fighting back against the #measlesoutbreak with facts. We need to continue to share the facts and counter the falsehoods. Our families' health and safety depend on continued fact-based outreach. https://t.co/v7FV8OYsio

There is no question – you trust medical professionals for everything else. Get vaccinated!

Thank you @YWN, for providing continuous coverage on this issue.https://t.co/AUXxoxybFR

As straightforward a message as can be: VACCINATE!

THE FOLLOWING IS FROM THE CDC:

Q: I’ve been exposed to someone who has measles. What should I do?

A: Immediately call your doctor and let him or her know that you have been exposed to someone who has measles. Your doctor can

If you are not immune to measles, MMR vaccine or a medicine called immune globulin may help reduce your risk developing measles. Your doctor can help to advise you, and monitor you for signs and symptoms of measles.

If you do not get MMR or immune globulin, you should stay away from settings where there are susceptible people (such as school, hospital, or childcare) until your doctor says it’s okay to return. This will help ensure that you do not spread it to others.

Q: Am I protected against measles?

A: CDC considers you protected from measles if you have written documentation (records) showing at least one of the following:

Q: What should I do if I’m unsure whether I’m immune to measles?

A: If you’re unsure whether you’re immune to measles, you should first try to find your vaccination records or documentation of measles immunity. If you do not have written documentation of measles immunity, you should get vaccinated with measles-mumps-rubella (MMR) vaccine. Another option is to have a doctor test your blood to determine whether you’re immune. But this option is likely to cost more and will take two doctor’s visits. There is no harm in getting another dose of MMR vaccine if you may already be immune to measles (or mumps or rubella).