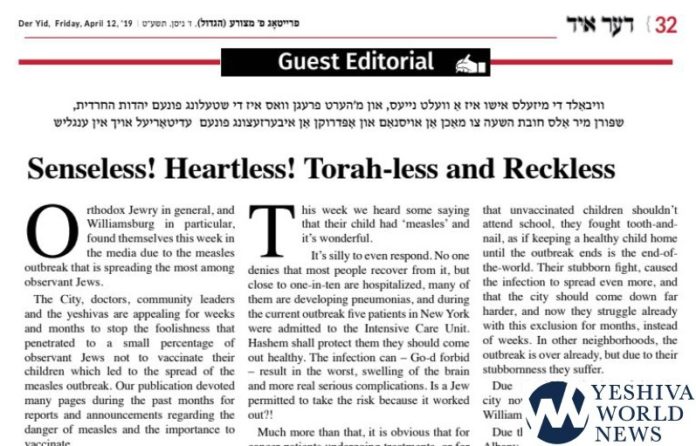 The Der Yid Newspaper (affiliated with the Satmar community of Williamsburg) printed a strong editorial against the anti-vaxxers. The newspaper also took the rare step of printing it in English. It would be good if it can be posted. The English below is a verbatim translation of the Yiddish.

Below is an edited version for smoother reading and clarity.

Orthodox Jewry in general, and Williamsburg in particular, found themselves in the media this week due to the measles outbreak that is spreading among observant Jews more than any other community.

The City, doctors, community leaders and the yeshivas have been appealing with public for weeks and months to stop the foolishness that penetrated to a small percentage of observant Jews not to vaccinate their children which has directly led to the measles outbreak. Our publication has devoted many pages during the past few months with various reports and announcements regarding the danger of measles and the critical importance to vaccinate.

Yet, a small number of stubborn parents still know better.

We are not doctors; we have not studied medicine or statistics like the geniuses warning you about the dangers of vaccines. But we do know whom to trust when there is a serious health issue in the community.

When there is an emergency, one rushes to call Hatzalah.

When there are doubts if one needs to fast on Yom Kippur, one asks a regular doctor – not a nutritionists who may have good advice on the best diets.

When it’s time to decide if to have a serious surgery, you don’t turn to a hotlines, but you go to a conventional doctor.

When you need a referral to a good doctor for a serious health problem you don’t stand at the bus stop to and take a poll of friends for the right address, but you call those devoted rabbis who understand medical matters or the recognized medical referral agencies who are familiar with the best doctors.

All of them say that one must vaccinate.

How can one even have the slightest doubt on whom to listen to?!

We are obliged by the Torah “Venishmartem Meod L’nafshoseichem,” -“to guard our health” and if the recognized experts are telling us to vaccinate, then we must do it.

This week we heard some saying that their child has ‘measles’ and it’s wonderful.

It is beyond silly to even respond. No one denies that most people recover from it, but nearly one-in-ten are hospitalized, many of them are developing pneumonias, and during the current outbreak five patients in New York were admitted to the Intensive Care Unit and we pray to Hashem shall protect them they should come out healthy. The infection can – Go-d forbid – result in the worst, swelling of the brain and more real serious complications. Is a Jew permitted to take the risk because it worked out for their child before?

Much more than that, it is obvious that for cancer patients undergoing treatments, or for other people struggling with health issues, exposure to the measles is really extremely dangerous.

We heard an argument from the anti-vaxxer group that those who are in danger because they are sick, they should watch themselves. Let the unhealthy children stay home so my unvaccinated child can go to school.

Is it possible that a Jew is really presenting such a ridiculous argument?

This is brutal, heartless!

They want sick kids who have to go to the hospital for serious medical treatments, or are hospitalized for other reasons, to not be able to spend time with their friends in Yeshiva because others have baseless myths against vaccinating?

Where is your heart to feel that it is ok to harm sick Jews? How can one endanger others due to outright fantasies?

If you believe in those myths and if you want to go back in time to a hundred years ago when people weren’t vaccinating, then keep your children home as was the norm a century ago, and don’t make life more difficult for those suffering enough.

Finally, if someone still doubts if the anti-vaccinate movement has anything to do with Judaism or sanity, they only have to analyze how this group fights for their cause.

When the Department of Health ordered that unvaccinated children shouldn’t attend school, they fought tooth-and-nail, as if keeping a healthy child at home until the outbreak ends is the end-of-the-world. Their stubborn fight, caused the infection to spread even more, and caused the city should have to take more and more action, and now schools are struggling already with this exclusion for months, instead of weeks. In other neighborhoods, the outbreak is over already, but due to the anti-vax stubbornness our schools suffer.

Due to their relentless fight, the city now mandated that everyone in Williamsburg has to vaccinate.

Due their fight, there is now a bill in Albany to prohibit the use of religion as an excuse not to vaccinate. Should this pass, parents will have no choice but to give their children all vaccines – not only now, but forever, going forward.

Due to this fight, even those with legitimate health exemptions have to keep their children home.

The small group of anti-vaxxers who spoke to the press and tarnished the image of observant Jews, as if we can’t be trusted to make the right choices for our children, and implying we spread infections intentionally.

We learned of instances in certain areas where people warn to distance from Jews to avoid infections. It reminds of medieval libels that Jews are causing plagues which led to horrible antisemitism. This may, Go-d forbid, start a fire of hatred to Jews.

Their entire fight is conducted in a short-sighted non-Jewish manner, which only harmed their interests and brought a terrible defamation of Hashem’s name, and plays in to the hands of those who want to destroy the independence of our yeshivas which has zero to do with vaccinations.

What else has to happen until they realize that this is the wrong path?