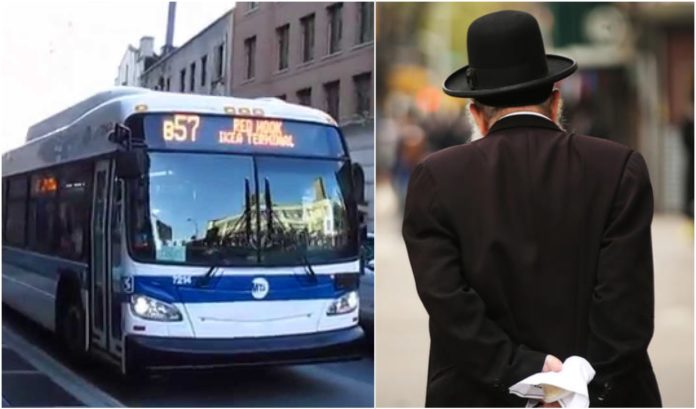 An MTA bus driver allegedly made anti-Semitic remarks towards a Hasidic man, regarding the measles outbreak in the community.

The United Jewish Organizations of Williamsburg said the incident happened last week on a B57 bus.

The clearly Hasidic man, in his 40s, was waiting for the bus at the corner of Flushing and Franklin Avenues when the bus allegedly passed by without stopping.

The man ran to the bus, which was stopped at the next corner, and knocked on the door hoping to board the bus.

That’s when the bus driver allegedly covered her face with her sweater and turned away from him towards the window.

The man tried handing the driver a transfer, but she allegedly responded, shouting: “Measles! Go in!”

The @MTA is investigating after a Hasidic man said he was the victim of an anti-Semitic incident on a bus in #Brooklyn last week related to the recent #measles outbreak. @LindsayTuchman has the latest. #MorningsOn1 pic.twitter.com/SbAXCvDdPV

NYC Mayor Bill DeBlasio and the city’s bus department took to Twitter to condemn the incident and promised an investigation.

The incident comes amidst a measles outbreak that has sickened nearly 300 people in New York City, the majority in the Orthodox Jewish communities. The city has responded by threatening to fine parents who do not vaccinate their children, and to close Yeshivas that allow unvaccinated children to attend.

Facts are, about 95% of the community is vaccinating. We, the Rabbis and community leaders, are working hard to increase it. Not justification to attack the entire community for the shortcomings of a few.

Anti-Semitic discrimination has no place in our city. We’ve reached out to the MTA about this report and will make sure it is thoroughly investigated. https://t.co/pA2g1lCLut

Good afternoon. We take reports of this kind extremely seriously. Please know that we are currently investigating. Thank you for reporting this to us. ^BD

Thank you Mr. Mayor for speaking up against antisemitism. The outbreak – that we are all working so hard to end – isn't an excuse for antisemitism!