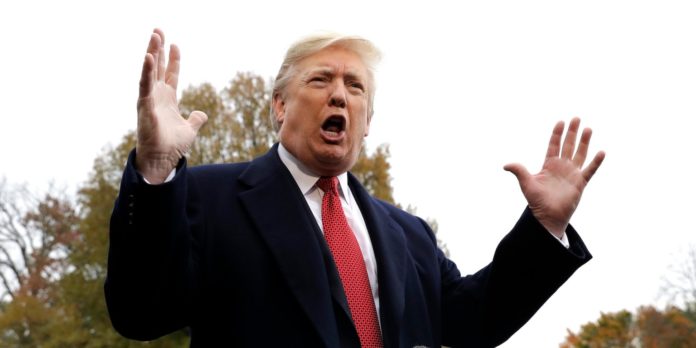 President Donald Trump lashed out Friday at current and former aides who cooperated with special counsel Robert Mueller’s investigation, insisting the deeply unflattering picture they painted of him and the White House was “total [EXPLETIVE REMOVED].”

In a series of angry tweets from rainy Palm Beach, Florida, Trump laced into those who, under oath, had shared with Mueller their accounts of how Trump tried numerous times to squash or influence the investigation and portrayed the White House as infected by a culture of lies, deceit and deception.

“Statements are made about me by certain people in the Crazy Mueller Report, in itself written by 18 Angry Democrat Trump Haters, which are fabricated & totally untrue,” Trump wrote, adding that some were “total [EXPLETIVE REMOVED] & only given to make the other person look good (or me to look bad).”

The attacks were a dramatic departure from the upbeat public face the White House had put on it just 24 hours earlier, when Trump celebrated the report’s findings as full exoneration and his counselor Kellyanne Conway called it “the best day” for Trump’s team since his election. While the president, according to people close to him, did feel vindicated by the report, he also felt betrayed by those who had painted him in an unflattering light — even though they were speaking under oath and had been directed by the White House to cooperate fully with Mueller’s team.

Statements are made about me by certain people in the Crazy Mueller Report, in itself written by 18 Angry Democrat Trump Haters, which are fabricated & totally untrue. Watch out for people that take so-called “notes,” when the notes never existed until needed. Because I never…. 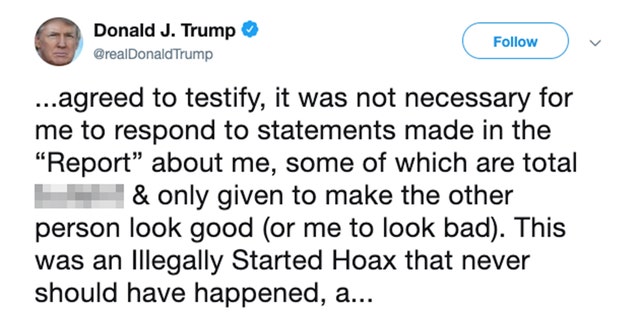 ….big, fat, waste of time, energy and money – $30,000,000 to be exact. It is now finally time to turn the tables and bring justice to some very sick and dangerous people who have committed very serious crimes, perhaps even Spying or Treason. This should never happen again!

The reaction was not entirely surprising and had been something staffers feared in the days ahead of the report’s release as they wondered how Mueller might portray their testimony and whether the report might damage their relationships with Trump.

While Mueller found no criminal evidence that Trump or his campaign aides colluded in Russian election meddling and did not recommend obstruction charges against the president, the 448-page report released Thursday nonetheless paints a damaging picture of the president, describing numerous cases where he discouraged witnesses from cooperating with prosecutors and prodded aides to mislead the public on his behalf to hamper the Russia probe he feared would cripple his presidency.

The accounts prompted Republican Sen. Mitt Romney, who has sometimes clashed with Trump, to release a statement saying he was “sickened at the extent and pervasiveness of dishonesty and misdirection by individuals in the highest office of the land, including the President.”

“Reading the report is a sobering revelation of how far we have strayed from the aspirations and principles of the founders,” he said.

“The Mueller Report is perhaps the single most humiliating thing that has ever happened to the White House Press in the history of this Country. They know they lied…Many reporters lied about Russia Collusion and so much more. Clapper & Brennan, all lies” @TuckerCarlson

The report concluded that one reason Trump managed to stay out of trouble was that his “efforts to influence the investigation were mostly unsuccessful … largely because the persons who surrounded the President declined to carry out orders or accede to his requests.”

That didn’t spare those who defied Trump’s wishes from his wrath.

Trump appeared to be especially angry with former White House counsel Don McGahn, who sat with Mueller for about 30 hours of interviews, and is referenced numerous times in the report.

Anything the Russians did concerning the 2016 Election was done while Obama was President. He was told about it and did nothing! Most importantly, the vote was not affected.

In one particularly vivid passage, Mueller recounts how Trump called McGahn twice at home and directed him to set in motion Mueller’s firing. McGahn recoiled, packed up his office and threatened to resign, fearing the move would trigger a potential crisis akin to the Saturday Night Massacre of firings during the Watergate era.

In another section, Mueller details how Trump questioned McGahn’s note-taking, telling the White House counsel that, “Lawyers don ’t take notes” and that he’d “never had a lawyer who took notes.”

“Watch out for people that take so-called “notes,” when the notes never existed until needed,” Trump said in one of his tweets Friday. Others whose contemporaneous notes were referenced in the report include former staff secretary Rob Porter and Reince Priebus, Trump’s first chief of staff.

Trump ended his tweet with the word, “a…” suggesting more was coming. More than eight hours later, he finally completed his thought, calling the probe a “big, fat, waste of time, energy and money” and threatening investigators by saying, “It is now finally time to turn the tables and bring justice to some very sick and dangerous people who have committed very serious crimes, perhaps even Spying or Treason.” There is no evidence of either.

Trump, who is in Florida for the Easter weekend, headed to his West Palm Beach golf club Friday after some early morning rain had cleared. There he played golf with conservative talk radio host Rush Limbaugh “and a couple friends,” according to the White House.

He’ll spend the rest of the weekend with family, friends and paying members of his private Mar-a-Lago club in Palm Beach.

As Trump hopped off the steps from Air Force One on Thursday evening, he was greeted by a throng of supporters, who clamored for autographs and selfies. He repeatedly told the crowd “thank you everybody” as they yelled encouragement.

Ari Fleischer, who served as White House press secretary to former President George W. Bush, said in an appearance on Fox News that he didn’t understand why Trump decided to send his tweets lashing out at former aides.

“I think it’s over,” he said. “If I were the president, I would have basically declared victory with the Mueller report and everything that came out and move beyond it.”

Still, he said he hoped the White House had learned some lessons.

“The president and his entire team needs to realize how close they came to being charged with obstruction,” Fleischer said. “Asking your staff to lie and engaging in some of the activities that the Mueller report stated the president engaged in is too close to obstruction. And that’s a lesson I hope everybody at the White House takes with them going forward.”

As I have been saying all along, NO COLLUSION – NO OBSTRUCTION! pic.twitter.com/BnMB5mvHAM