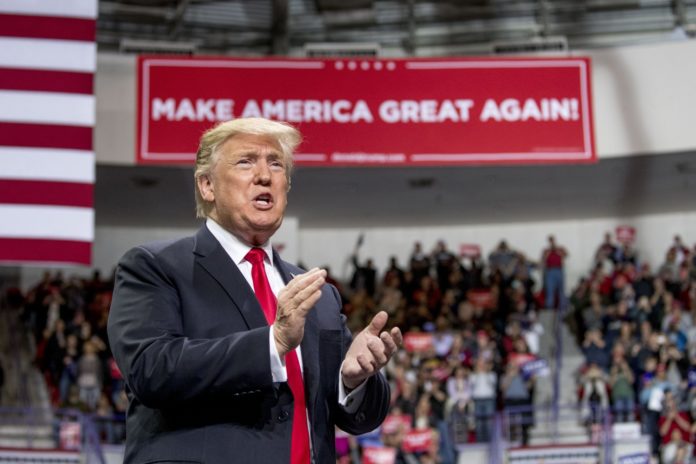 President Donald Trump spent his first campaign as an underdog, written off by the political establishment and down on his own chances on election night. But as he and his team gear up for reelection, they’re claiming an unfamiliar position: front-runner.

Trump and his allies are exuding optimism about his 2020 bid, touting a strengthening economy, their organizational and fundraising head-start and a crowded Democratic primary poised to turn ugly. With the Mueller report completed and no GOP primary challenger gaining traction against Trump, many Republicans believe — and have started to act like — the president is the odds-on favorite to win a second term.

Trump will have a chance to showcase his growing assurance at a political rally in the Florida Panhandle on Wednesday night. The sentiment is a far cry from the 2016 campaign and the early days of the administration when some Republicans fretted that the chaos surrounding Trump would doom the GOP’s ability to hold onto the White House. And it’s emboldening Trump to become even more aggressive in pursuing his agenda, whether it’s slapping tariffs on China or stymieing the work of congressional investigators.

The risk of overconfidence is clear.

Trump’s 2016 Electoral College landslide was won on a razor’s edge — about 77,000 votes across the upper Midwest. His path back to the Oval Office is fraught with uncertainty: Will the economy remain on the upswing? Which Democrat ultimately emerges from the packed field of challengers? Can Trump hold onto the working-class voters who propelled him to the White House in the first place?

“It’s a long race, and we’re not taking anything for granted,” said Trump campaign communications director Tim Murtaugh, “but we like the position that we’re in.”

Trump’s supporters believe history is on their side. When unencumbered by primary challengers, sitting presidents have never lost their reelection bids in the modern era, bringing to bear structural advantages, not the least of which is that they don’t have to persuade voters to imagine them in that role.

“The advantages of not having to fight for re-nomination are enormous,” said Michael Nelson, a professor of political science at Rhodes College and the author of the book “Trump: The First Two Years.” ″Every dollar you raise can be spent advancing your own cause and tearing down your opposition.”

That was the biggest X-factor in 2016, when it was an open question whether voters would take a chance on a controversy-prone reality television star who had never held public office.

The president’s self-assured posture has been reflected in his campaign strategy, which has focused so far on rousing Trump’s hardcore supporters, rather than projecting a persuasive message to more skeptical moderates. Enough of those voters will eventually come along, Trump’s team believes, once the Democratic primary race concludes, as the GOP is set to brand the eventual rival as a “socialist” and outside the mainstream.

Trump’s team has taken to cheering every call to impeach the president, believing such talk only further motivates Trump’s supporters and turns off moderates from the Democratic Party. The president himself still intends to run as the victim of perceived slights by the media and Democrats, in large part because he believes the aggrieved stance rallies supporters to his defense.

Recent surveys have shown Trump’s approval ratings improved from 2018 lows and near the historical threshold consistent with reelection. And though the midterm elections were tough on the GOP, Trump’s team believes Republicans struggled because the president’s name wasn’t on the ballot. Some early head-to-head polling between Trump and his potential rivals places Democrats on top, but Trump’s team believes that’s because they haven’t yet been able to define their eventual opponent.

The confidence is not just confined to Trump’s team. Republicans on Capitol Hill, who never fully embraced Trump but remain fearful of his ire, are digging in for the long haul. And many Washington lobbying shops, which previously viewed the Trump years as a four-year interlude from traditional politics, have come to believe Trump has more staying power.

Even Democrats have taken to hyping the president’s positioning as they race to cash in on fears of another Trump term. “He has been preparing his entire presidency for this election,” warned a Tuesday fundraising email for Joe Biden’s campaign. “He already has $40 million in the bank.”

“Two key strengths of Trump’s last campaign were that no one believed he’d be as bad as people warned and no one believed he’d actually win,” said Democratic strategist Jesse Ferguson. “This time, Americans know he can win and know he’s turned out much worse than anyone could have imagined.”

Friday’s jobs report, which showed unemployment at 3.6%, the lowest in 50 years, was the latest in a string of positive developments since the conclusion of special counsel Robert Mueller’s investigation, which didn’t find evidence of conspiracy with Russia or make a recommendation of charges against the president.

White House press secretary Sarah Sanders said Trump is confident that the American people believe he fulfilled his campaign promises. “You’re more comfortable when you have a record of accomplishment to point to, and he does,” she said.

The confident talk is backed up by a massive political operation that integrates the campaign and the Republican National Committee — a partnership that was strained in 2016 by lingering resentments over Trump’s insurgent takeover of the GOP. Now Trump’s grasp on the party is total, and the recent spate of good news has snuffed out any talk of a serious challenge from within.

Trump has raised more than $150 million for his reelection effort since taking office as Republican donors who were wary of backing Trump in 2016 rushed in to aid the 2020 effort. Now campaign manager Brad Parscale said he hopes to raise a record $1 billion by Election Day.

“There are a lot of advantages where the Trump team is campaign-wise compared to four years ago,” said Jason Miller, Trump’s 2016 campaign’s senior adviser for communications. “It’s apples and oranges.”