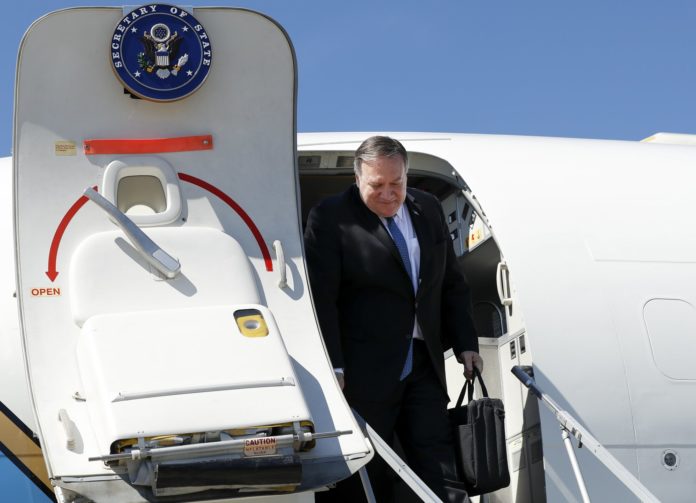 Secretary of State Mike Pompeo is off to Europe on Thursday to seek support and a potential diplomatic climb-down to ease rising tensions between the U.S. and Iran.

Even as the Trump administration revels in its “maximum pressure” campaign against Iran, Pompeo is traveling to Germany, Switzerland, the Netherlands and Britain to assure European leaders that the U.S. is not looking for conflict, press them to do what they can to cool the situation, and perhaps open a channel of communication with the Islamic Republic.

After a brief stop in Berlin on Friday to make up for a meeting with German Chancellor Angela Merkel that he abruptly called off earlier this month to fly to Iraq, Pompeo will make an unusual and extended stop in Switzerland, the country that has long represented Washington’s interests in Tehran and has in the past been an intermediary between the two. His three days in Bern will be the first visit to the Swiss capital by a secretary of state in more than two decades and comes amid public signals from President Donald Trump that he wants to talk with Iran.

“If they want to talk, I’m available,” Trump said last Friday, even as Pompeo and hawkish national security adviser John Bolton have stepped up warnings that any attack on American interests by Iran or its proxies will draw a rapid and significant response from bolstered U.S. forces in the Mideast. Bolton, in the United Arab Emirates earlier this week, blamed Iran for recent sabotage to tankers in the Gulf and attacks on Saudi Arabia’s oil infrastructure by Yemeni rebels it backs.

U.S. officials have downplayed speculation that Pompeo will use his time in Switzerland to try to open a direct line to the Iranians. But the Bern visit, along with day stops in Montreaux for the annual meeting of the secretive Bilderberg Group of global influencers and in the town of Bellinzona for talks with the Swiss foreign minister, offers an opportunity to explore the possibility.

“There are only a few countries that have the trust of both Tehran and Washington,” said Karim Sadjipour, an Iran expert at the Carnegie Endowment for International Peace. “Oman is one of them and Switzerland is the other.”

Both channels are well-known, and Pompeo’s trip to Switzerland follows a call he made two weeks ago to the Sultan of Oman, who just days later dispatched his top diplomat to Tehran for a meeting with Iranian Foreign Minister Mohammed Javad Zarif. Oman was the mediator and host of secret U.S.-Iran talks during the Obama administration that ultimately led to the 2015 nuclear deal.

Trump has withdrawn from the nuclear deal and reinstated crippling sanctions on Iran. Yet, as he reiterated in his comments to reporters on Friday, he has held open the prospects of a negotiation along the lines of what he has pursued with North Korean leader Kim Jong Un. Trump even raised the prospect of a U.S.-Iran summit while he was visiting Japan earlier this week, and while there are no signs that Tehran is considering the prospect, analysts believe the pressure from American sanctions may force it to drop its defiance and talk at some point.

“The question is which is going to break first, Iran’s pride or its economy?” Sadjipour said. “Either way my sense is that the Iranians would probably prefer a private dialogue via back channels and would want to avoid a public summit.”

Below Trump’s level, the administration’s appetite for direct or even indirect negotiation with Iran is uncertain. Neither Bolton nor Pompeo appears eager to talk, but that may not matter in the end. Despite 40 years of enmity tempered by occasional periods of rapprochement, American presidents have found that Iran cannot be ignored.

“Every American administration since 1979 has had some kind of diplomatic talks with the Iranians. If the Trump administration doesn’t, it will be the first,” said Michael Singh, a National Security C ouncil official during President George W. Bush’s administration who is now the managing director of the Washington Institute for Near East Policy. “There is benefit to using a cutout at a time when tensions are high and neither side is willing to openly get into a negotiation. But, it would have to transfer to something public pretty quickly.”

Still, Trump’s hopes for a summit with either Iran’s Supreme Leader Ayatollah Ali Khamenei or President Hassan Rouhani may remain a pipe dream.

Khamenei views talks with any American as “anathema” to Iran’s interests and may not allow Rouhani to pursue the option if it was presented, Singh said.

And yet, there is precedent for something more.

“The parallels with North Korea are there,” said Sadjipour, recalling that in the months before Trump’s first meeting with Kim “a lot of people were worried that we were going to go to war. There are major differences between Iran’s leadership and North Korea’s leadership, but this is what Trump is hoping for.”