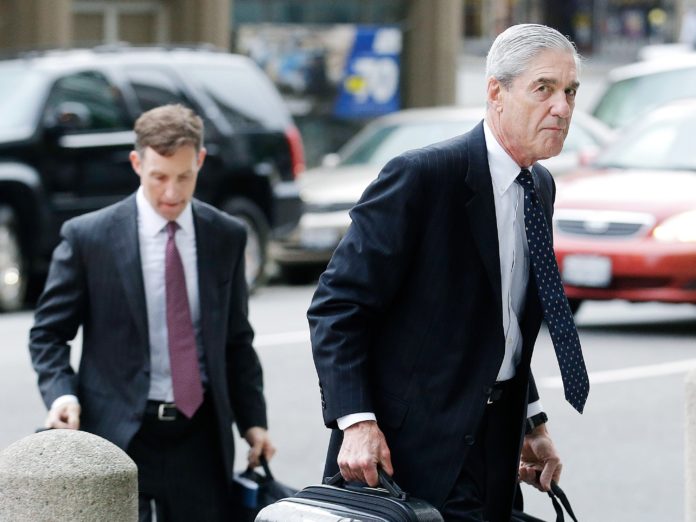 Former special counsel Robert Mueller has requested that his longtime associate, Aaron Zebley, appear alongside him as he testifies before the House Judiciary Committee on Wednesday, according to a person familiar with the negotiations.

Zebley, Mueller’s former chief of staff and his top aide on the Russia investigation, would be an unexpected addition, the issue arising less than 24 hours before the hearing begins. The person requested anonymity to freely discuss the talks.

Democrats hadn’t yet announced whether they would agree to the request, and Republicans are livid about it. Georgia Rep. Doug Collins, the Judiciary panel’s top Republican, called the move an “apparent stunt” by Democrats. He said it “shows the lengths Democrats will go to protect a one-sided narrative from a thorough examination by committee Republicans.”

Republican Rep. Jim Jordan, another member of the committee, tweeted: “You don’t get to change the rules right before kickoff.”

It’s unclear if Mueller has made a similar request to the House intelligence committee, which will ask questions of him in a second hearing on Wednesday. The sessions will review Mueller’s 448-page report released in April.

The intelligence panel had hoped to question Zebley and another member of Mueller’s Russia team, James Quarles, behind closed doors in a separate classified setting. Negotiations on that meeting are ongoing.

Zebley has not been authorized by the Justice Department to appear at the open hearing, a separate person familiar with the matter said. That person also requested anonymity to discuss the negotiations. Attorney General William Barr has made it clear he does not want Mueller’s deputies to appear in a closed session, either.

The possible change in lineup comes as the Justice Department is asking Mueller not to stray beyond his report on Russian election interference when he testifies to Congress on Wednesday.

In a letter sent Monday to Mueller, Associate Deputy Attorney General Bradley Weinsheimer said he should not speak about redacted material from his report — including material pertaining to pending criminal prosecutions, “uncharged third-parties” and “executive privilege,” such as “presidential communications privileges.”

Full Coverage: Trump Investigations
The letter is entirely in line with what Mueller has already said — that he doesn’t intend to speak beyond his report’s findings during Wednesday’s hearings before the House Judiciary and intelligence committees. But it gives Mueller a formal directive to point to if he faces questions he does not want to answer.

“The report is my testimony,” Mueller said in a televised statement in May . “I would not provide information beyond that which is already public in any appearance before Congress.”

Still, Democrats are preparing questions to highlight the report’s most damning details. Judiciary panel Democrats planned to practice with a mock hearing behind closed doors Tuesday.

Barr has said congressional Democrats were trying to create a “public spectacle” by subpoenaing Mueller to testify and has offered to give Mueller an out, saying earlier this month that he and the Justice Department would support Mueller if he decided he didn’t want to “subject himself” to the congressional appearances. Barr has also said he’d block any attempts to force members of Mueller’s team to testify before Congress.

While Mueller’s 448-page report did not find sufficient evidence to establish charges of criminal conspiracy between the Trump campaign and Russia to swing the election, it said Trump could not be cleared of trying to obstruct the investigation.

The nation has heard the special counsel speak only once — for nine minutes in May — since his appointment in May 2017.

Mueller’s testimony will include an opening statement on Wednesday, but his spokesman said it would be similar in substance to his statement from late May at the Justice Department’s podium.

The Justice Department’s letter to Mueller was in response to a request from Mueller for information about limitations or potential privilege issues. Mueller’s spokesman did not immediately provide a copy of the letter the former special counsel had sent to the Justice Department earlier this month.