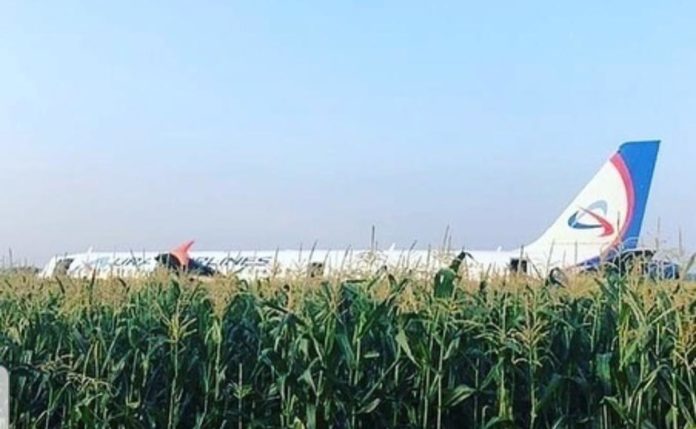 The captain of a Russian passenger jet was hailed as a hero Thursday for landing his plane in a cornfield after it collided with a flock of gulls seconds after takeoff, causing both engines to malfunction. While dozens of people sought medical assistance, only one was hospitalized.

The event drew comparisons to the 2009 “Miracle on the Hudson,” when a captain ditched his plane in New York’s Hudson River after a bird strike disabled his engines.

The Ural Airlines A321 carrying 226 passengers and a crew of seven hit the birds as it was taking off Thursday from Moscow’s Zhukovsky airport en route for Simferopol, in Crimea.

Russia’s Rosaviatsiya state aviation agency chief Alexander Neradko told reporters that the crew “made the only right decision” to land the fully loaded plane immediately after both of the plane’s engines malfunctioned.

“The crew has shown courage and professionalism and deserve the highest state awards,” he said.

The plane was fully loaded with 16 tons of kerosene, he added.

“Just imagine what the consequences would be if the crew didn’t make the correct decision.”

From above: Ural Airlines, flight #U6178 operating from Moscow to Simferopol which suffered a bird strike on takeoff earlier today.

The aircraft landed in a cornfield near the airport — extraordinary images. pic.twitter.com/xOjsZcfV0t

The airline said the captain, 41-year old Damir Yusupov, is a highly experienced pilot who has logged over 3,000 flight hours.

Yusupov, a son of a helicopter pilot, worked as a lawyer before he changed course and joined a flight school when he was 32. A father of four, he has flown with the Ural Airlines since his graduation in 2013 and became the captain last year.

Yusupov’s wife told Rossiya state television from their home in Yekaterinburg that he called her after landing before she had heard about the emergency.

“He called me and said that everyone is alive,” she said. “I was horrified and in panic and burst into tears.”

Russian television stations carried footage of passengers standing in the cornfield next to the plane, hugging the pilot and thanking him for saving their lives.

“It was quite a feat to keep the plane from stalling and quickly find a place to land,” Viktor Zabolotsky, a former test pilot, said in televised remarks. 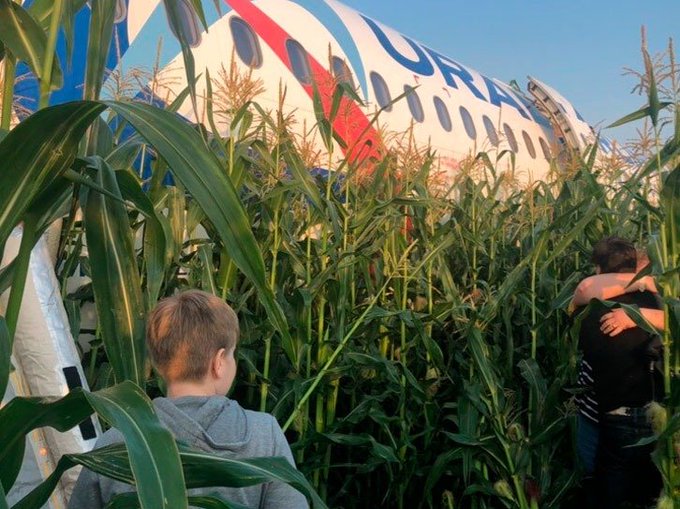 The crew received swift accolades. Russian President Vladimir Putin’s spokesman, Dmitry Peskov, hailed the pilots as “heroes” and said they will receive state awards. And Prime Minister Dmitry Medvedev opened a session of Cabinet by praising the crew and asking the transport minister to explain what happened.

The Emergencies Ministry said that 55 people asked for medical assistance after the incident. The health authorities said 23 people, including five children, were taken to the hospital, but all but one were released following check-ups and quick treatment. 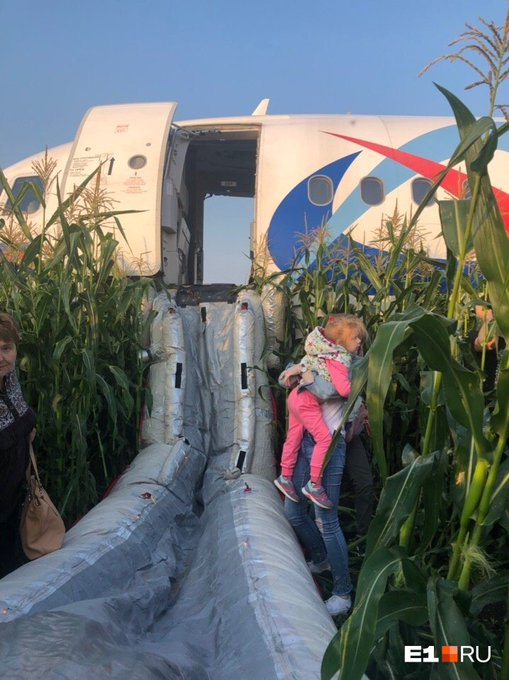 Plane engines are designed to withstand occasional bird strikes, but a collision with a flock of birds can result in serious trouble. Bird strikes on planes occur regularly around the world, and airports use bird distress signals, air cannons and other means to chase birds away — measures which aren’t always efficient.

In 2009, a US Airways Airbus A320 hit a flock of geese after takeoff from New York City’s LaGuardia Airport and both of its engines shut down. The crew made an emergency landing in the Hudson River off Midtown Manhattan, and everyone survived. 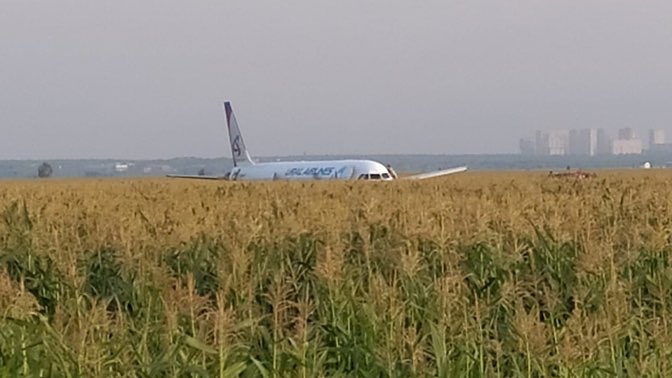 The “Miracle on the Hudson” was immortalized in the Hollywood movie “Sully,” based on the autobiography of Capt. Chesley Sullenberger and starring Tom Hanks.

Some media reports suggested that the birds could have been drawn to Zhukovsky by an unauthorized garbage dump in the vicinity, but there was no immediate confirmation of the claim.