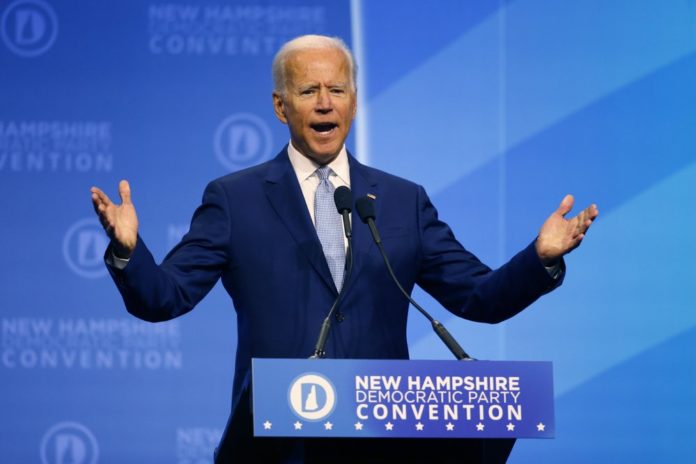 When Joe Biden took the stage in New Hampshire, he was greeted with the respect that comes with being a former vice president.

Some of his closest rivals were greeted more like rock stars.

The scene at New Hampshire’s Democratic convention on Saturday highlighted one of the riddles of Biden’s candidacy: He maintains a lead in nearly every poll, but his campaign events often lack the look and feel of a front-runner. His crowds are warm, but rarely high-energy. His organization is solid, but doesn’t always show up in force at key events that help shape the perceptions of political power brokers.

Biden’s team insists such optics are overrated as indicators of a candidate’s strength. The former vice president, they argue, is unique in the Democratic field because of a reservoir of goodwill from a broad group of supporters who know him so well they don’t necessarily need to see him campaign or otherwise demonstrate their support in public.

“I think people can be fooled by the crowd size,” said Terry Shumaker, a staunch Biden supporter in New Hampshire. Shrugging off “lots of noise for some candidates,” Shumaker compared Biden’s support to an iceberg, where only one-seventh is visible.

But after the 2016 campaign, enthusiasm is on the minds of Democrats. The party downplayed the large crowds at Donald Trump’s high-octane rallies throughout that campaign, predicting it wouldn’t translate into an Election Day victory. Hillary Clinton, meanwhile, headlined smaller events and ultimately struggled to match Republican enthusiasm.

Heading into 2020, there is no question that Democrats are highly energized at the prospect of ousting Trump, but far less clear is whether Biden is the vessel for that enthusiasm.

On Saturday in New Hampshire’s largest city, the contrast between Biden and some of his Democratic rivals — particularly Massachusetts Sen. Elizabeth Warren — was striking.

A sea of rowdy sign-waving Warren volunteers lined the sidewalks to greet convention attendees outside a Manchester sports arena before 7 a.m. They chanted, “L-I-Z, she’s got a plan for me” as a band played.

Rival campaigns grumbled privately that Warren, who represents neighboring Massachusetts, was benefiting from a home-field advantage. At least some of Warren’s supporters came to New Hampshire from out of state, according to social media posts and interviews, as did other candidates’ backers, including Biden’s.

Biden’s team was more muted outside the venue, where the campaigns worked to flex their organizational muscle for one of the state’s largest political gatherings. And inside, Biden’s campaign appeared to get off to a slow start, with volunteers still scrambling to hand out campaign signs as the former vice president spoke.

By the time Warren took the stage hours later, her campaign had distributed hundreds of noise-making thundersticks and packed the arena with cheering supporters. The crowd gave her an ovation that spanned two full minutes.

To be sure, the weekend convention was full of Democratic activists who are not necessarily representative of the average primary voter. Independent voters, for example, are allowed to vote in New Hampshire’s February first-in-the-nation presidential primary and may be a strong source of support for Biden. They were not a significant presence at the partisan convention.

Still, the event marked a significant test for each campaign, according to Lucas Meyer, president of the New Hampshire Young Democrats.

“It’s an opportunity to show how strong your organization is,” said Meyer, noting that some campaigns were at the convention site at 11 the night before preparing for what was one of the largest gathering of New Hampshire Democrats of the year.

Meyer said Warren’s strength was “irrefutable,” but added that Biden is well known and popular across the state as well. The former vice president headlined the Young Democrats’ July event, the largest in the organization’s history.

And Biden was not exactly snubbed at the convention. The crowd of activists and political power brokers, many of whom have known him for years, cheered him for 30 seconds before he opened his speech.

Yet, there was a noticeable uptick in enthusiasm for several other candidates who followed, including New Jersey Sen. Cory Booker, Texan Beto O’Rourke, Vermont Sen. Bernie Sanders and 37-year-old Pete Buttigieg, who has urged voters to elevate a new generation of leaders.

“Every time we’ve tried to play it safe with established and Washington-tenured figures, every single time we’ve come up short,” Buttigieg told reporters after his remarks.

Biden bristles when asked about his support on the campaign trail, where his crowd sizes are often smaller than his top-tier rivals.

“What I’m trying to do is go around from town to town and I’m drawing as big of crowds, or bigger than anybody,” Biden said last month after an event in Prole, Iowa, that drew about 130 people in a town with a population of less than 1,000. “Have you seen anybody draw bigger crowds than me in this state?”

In fact, some of his rivals have drawn bigger crowds, both in Iowa and elsewhere. Warren in particular has seen a surge in her crowds, drawing about 12,000 people in Minneapolis and 15,000 in Seattle over the summer.

And the Democrats’ ultimate 2020 opponent, Trump, has consistently filled stadiums in battleground states across the country, including the same arena that hosted the weekend Hampshire convention. The arena was at least one-third empty on Saturday even during its most crowded moments.

That didn’t seem to bother Biden, who cast himself as best positioned to defeat Trump during his convention remarks.

“We cannot, and I will not, let this man be reelected president of the United States of America,” he declared.