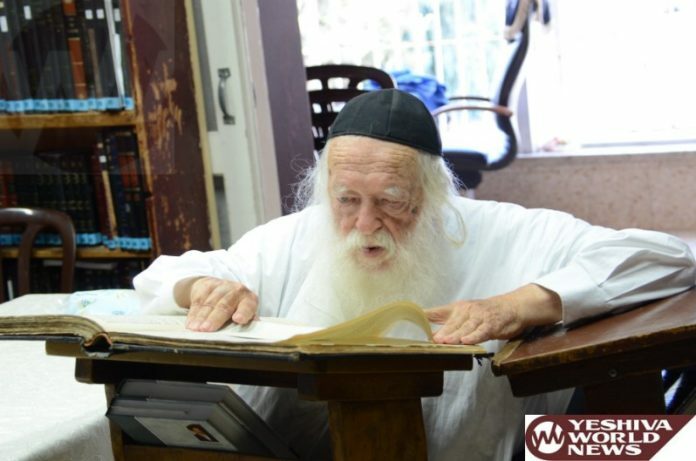 A while ago, a Sefer entitled “Siach Chaim” by Rav Yitzchok OhevTzion was published containing letters back and forth between the author and Rav Chaim Kanivsky Shlita.  What distinguishes this work from that of many others of the same genre is that this two volume work contains an approbation from Rav Kanievsky.  Many of the halachos found in the work that pertain to Hilchos Chanukah are discussed below.

Q: The Mishna Brurah in 671:9 writes that a woman does not light Chanukah candles because “Ishto k’Gufo” – a man’s wife is like his own self.  Yet in 675:9 he cites the Olas Shmuel  that if she desires to light – she recites a bracha!

Q: I once heard in the name of a certain Gadol that a Kollel member who is learning Torah in the Beis HaMidrash – it is preferable that he not stop his learning, and his wife should light at home in his stead.  Should one conduct himself in such a manner?

A: One should NOT conduct himself such.

Q: On Shabbos Chanukah – when it is already 30 minutes  after Tzeis HaKochavim is it permitted to utilize and benefit  from the Chanukah lights?  Or do we say that since it was Muktzah during Bein haSHmashos one cannot benefit?

A: One may not benefit.

Q: What was the custom of the Chazon Ish’s house on Motzei Shabbos Chanukah?  Did Havdallah come first or did he light first?

A:  He did Havdallah first and then he lit.

Q:  According to the custom of those who light first then do Havdallah, should the wife also recite Boruch HaMavdil before her husband’s lighting?

A:  It is worthwhile that she do so.

Q;  May one light the Chanukah lights with oil that is Shviis?

A: It is forbidden.

Q: Is there any inyan to light the Chanukah candles with edible oil?

A:  Some say that there is.

Q:  It has been publicized in the name of Rav Chaim that if a person is in the hospital during Chanukah Rachmana litzlan, and he wishes to light Chanukah candles where he is, but the hospital policy is to forbid it, that he light with a battery operated flashlight.  Is this statement accurate that one can do so with a battery-operated electric flashlight?

A:  This is what they say in the name of the Chazon Ish zatzal.

Q:  The new floating wicks that exist in our times that the wick is covered with wax – does this lower the quality of the lighting with olive oil, since when the wicks are lit – it is fueled by the wax , and only afterward is it fueled by the olive oil and the essence is during the time of the lighting?  Or is there no concern here.

A: It does not lower the lighting quality

Q:  Why is the Mitzvah of Chanukah different than other Mitzvos – where there are different levels of observance – such as Mehadrin min haMehadrin – something we do not find regarding the other Mitzvod?

A: It is because the entire miracle happened because of a hidur – a higher level of observance – since Tumah is permitted for a public use. (In other words, the Maccabbees could technically have used the flask of impure oil, they just wanted to go the extra yard, since they  were setting things up for the first time after a long period of disuse.  In such circumstances everyone is looking and observing.  The Chashmonayim taught us not to settle for things that are impure – but to do it in the best possible manner.  This is a lesson in Chinuch too, to teach that one should always strive for the highest level.  So, explains Rav Chaim,  the Mitzvos of Chanukah were established in that manner as well – YH).

Q:  The Gemorah tells us in Shabbos 23b:  Rav Huna says that a person who is ragil b’ner will get children who are Torah scholars.  Yet we see many good and proper people who are careful in every aspect of the laws of Chanukah and even do mehadrin min hamehadrin, and yet they do not merit sons who are Talmidei Chachomim!

A:  The person should have exerted more oversight on his child’s Chinuch than he did.  He is himself [a bit] at fault.

Q:  In the matter of giving Chanukah gelt, it is said that the Steipler zatzal (Rav Chaim Kanievsky’s father) only gave it on a certain day of Chanukah.  Is this true?  What day was it and why did he do so?

A:  He gave it on the fifth day of Chanukah.  The reason is that it never falls on Shabbos.

Q: Is there an inyan to study for himself and to teach his children on the days of Chanukah, the miracles and marvelous events that happened to our forefathers in the times of the Maccabbees that re cited in the book of Yossifun etc. or should he continue in his normal method of learning.

A:  We learn the halachos of Chanukah.

Q:  In the Chassidish Sforim the custom is discussed of playing with dreidel during these times.  Is it proper to do so with one’s children or should one refrain from doing so?

A: Whoever does so, does so.