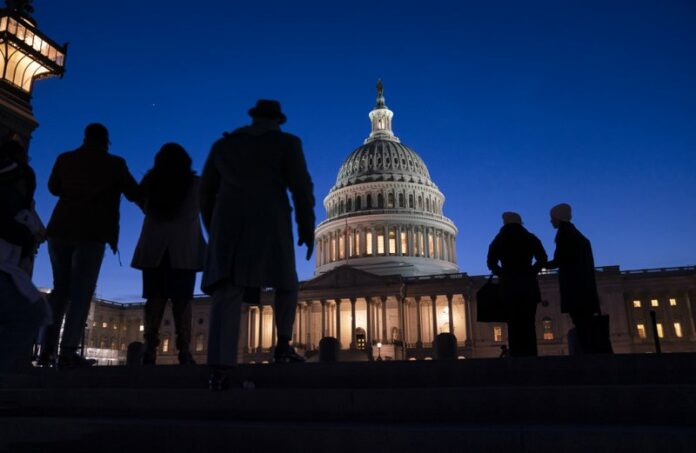 For all the gravity of a presidential impeachment trial, Americans don’t seem to be giving it much weight.

As House impeachment managers make their case to remove President Donald Trump from office, voters in several states said in interviews with The Associated Press that they’re only casually following the Senate trial, or avoiding it altogether — too busy to pay close attention, bored of the legal arguments, convinced the outcome is preordained or just plain tired of the whole partisan saga.

Web traffic and TV ratings tell a similar story, with public interest seeming to flag after the House voted last month to impeach a president for only the third time in U.S. history.

“I’ve been watching some really odd stuff just to avoid it,” said Kim Ashford, 50, a court-appointed advocate for foster children from Gilbert, Arizona. “In my circle, everybody’s tired of hearing about it. There’s nobody budging. Let’s just agree to disagree.”

Monica DeMarco, who voted for Trump in 2016 but doesn’t plan to do so again, said she hasn’t watched a single second of the trial, though she’s read a little about it in The New York Times.

“I want to watch something that takes me some place happy,” said DeMarco, 50, who lives near Hamburg, Pennsylvania, and works for a cargo hauler.

Many Americans are tuning out because they made up their minds about Trump’s impeachment months ago, said Eric Kasper, director of the Center for Constitutional Studies at the University of Wisconsin-Eau Claire. In addition, he said, there’s little doubt about the eventual outcome — acquittal by the GOP-controlled Senate — depriving the trial of drama.

“If the story was still unwritten, so to speak, then people would still tune in even if they had personally strong feelings about how they would want it to end,” Kasper said. “It’s the fact that both of those things are the case — a lot of people have made up their minds, and it looks pretty clear what the outcome of this trial is going to be.”

Americans are sharply divided along party lines in their views on impeachment, and most say their positions are firm. Three-quarters say it’s not very likely or not at all likely that the trial will introduce new information that would change their minds, according to a poll this month from The Associated Press-NORC Center for Public Affairs Research.

“I don’t think there’s any possibility of removal, said Montel Herman, 82, of Osage, Iowa, who described himself as a moderate Democrat. ”I question whether this is worth it.”

Online and on TV, interest has waned since the House launched impeachment hearings into Trump’s dealings with Ukraine.

The six major networks drew about 11.8 million viewers on the first day of the Senate trial, when lawmakers debated the rules and argued over documents and witnesses.

Combined viewership plummeted to fewer than 9 million people on the trial’s second day, when House Democrats began making their argument to remove Trump from office, according to Nielsen.

“I think it matters. I think we should probably watch it,” said Lynn Jackson, 56, a library assistant from San Tan Valley, Arizona. But, she added, “I work all day, and then I get home and I’m cooking, cleaning.”

Interest was a little higher among some of the Democrats lining up to see their party’s presidential candidates in the early-voting states of Iowa and New Hampshire this weekend. But even those watching closely said they have little doubt the trial will end in acquittal.

“I’m a bit intrigued by it, but it’s a foregone conclusion. I had a kid sick kid last week, but that’s the only reason I watched for a while. And I fell asleep twice,” said Jeremiah Condon, a 38-year-old building contractor from Fort Dodge, Iowa, who attended a campaign event for Democratic candidate Pete Buttigieg.

“It’s stunning how serious it is, and how little it seems to matter,” he said.

Up to this point, the Senate trial has featured evidence and arguments that have already been aired publicly, and it’s unclear whether senators will vote to hear from new witnesses that might heighten public interest.

“I’m not going to sit there and watch it word for word,” said Paul Faust, 69, an independent from Hamburg who voted for Trump and remains a supporter. “Every day it seems like they’re repeating the same thing over and over.”

Frank Sprague, chairman of the Claremont School Board in New Hampshire, said he’s finding impeachment interesting, but doubts most share his view.

“I think that there’s some fatigue around this,” Sprague said after an event for Democratic candidate Joe Biden. “The battle lines are drawn, the camps are where they are and some people are in intractable positions, left-right.”

Even though Dave Enslow knows how the trial will end, he said it’s still important to follow what’s happening.

“It’s a moment in history,” said Enslow, 41, who traveled to Iowa from his home in Seattle to see some of the Democratic candidates in person. “This is a big deal. … In the political world I’m not sure it’s going to go anywhere, but it’s important.”