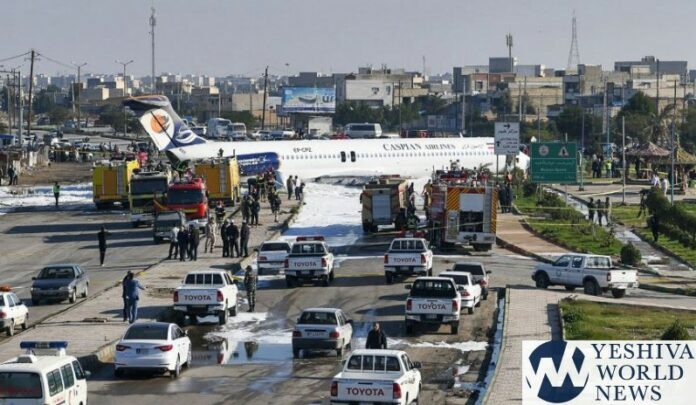 A plane carrying 136 passengers has skidded off the runway and onto a nearby street in the Iranian city of Mahshahr.

Two people were injured in the hard landing of the Caspian Airways McDonnell Douglas MD-83 aircraft, according to officials.

The flight had flown around 380 miles from the Iranian capital of Tehran to Mahshahr before its hard landing.

Shocked passengers, along with their hand luggage, left the aircraft via doors near the cockpit and over the wing.

A flight attendant can also be seen shouting towards passengers to walk calmly away from the aircraft.

Speaking in Farsi, a passenger is heard saying: “We crashed. We crashed but we are unhurt. My hand is shaking.”

Iranian authorities said that there were 136 passengers on board with eight crew members, and the airport’s director said that everyone had been taken off the plane safely.

Images from the landing site show that a disaster was narrowly averted, with the plane stopping close to a populated area, just beyond the airport’s runway.

As yet, there is no reason given for the jet failing to land on the runway.