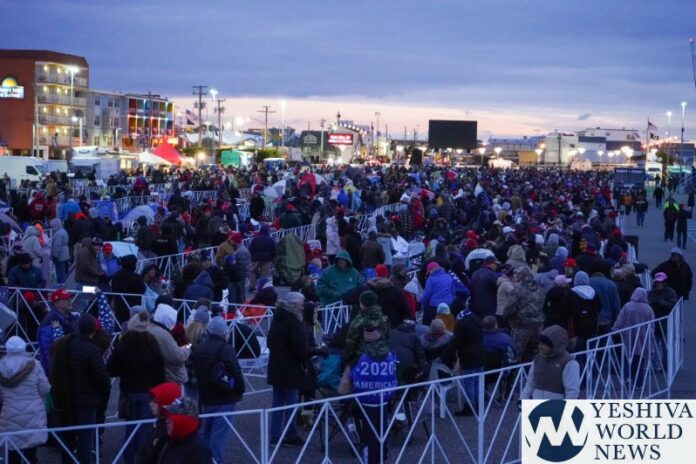 That’s a record for any President Trump rally anywhere, the president’s daughter-in-law Lara said in a radio interview.

The Wildwoods Convention Center holds 7,500 people. Supporters have been camping out outside the venue since early Monday morning hoping to get a spot inside.

A Jumbotron will be set up outside to handle the overflow crowds.

Meanwhile, hundreds of people braved the cold, and were camped out overnight – many of them on the beach.

Trump is scheduled to speak at the rally at 7 p.m. The doors open at 3 p.m.

Van Drew switched from the Democratic Party to the GOP in December 2019 and pledged his ‘undying support’ for President Trump.

Thousands lining up in Wildwood to see President in tonight’s rally. 7,500 capacity inside convention center. pic.twitter.com/qsoyrJf74A

At Trump rally in Wildwood. It’s 3:30am and estimated there is around 3,500 people so far. Some people have been here for two days! WE LOVE OUR PRESIDENT! 🇺🇸🇺🇸🇺🇸#TrumpRallyWildwood #TrumpRally pic.twitter.com/LRM6k4oXJo

MUST WATCH: President Trump doesn't take the stage in Wildwood, New Jersey for another 25 HOURS!

This is what the line looks like RIGHT NOW!#TrumpRallyWildwood pic.twitter.com/fU9WhJizDr

This is absolutely massive pic.twitter.com/24i3yz0UTb

President Trump doesn’t take the stage for another 24 hours

But look at the scene in Wildwood, New Jersey right now

Since when does a Republican get hundreds of patriots to camp out overnight in freezing weather…in New Jersey?

The Trump crowd camping out overnight in Wildwood is absolutely massive pic.twitter.com/uXxHy5Pe29