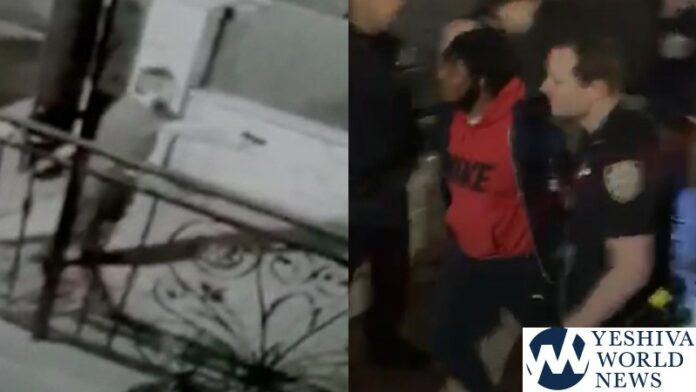 An armed Frum homeowner took down a burglar on his property in Queens, and the dramatic incident was all captured on security cameras.

Sources tell YWN that the homeowner was first alerted to trouble when his dog started barking at 1:00AM at his home at 73rd ave 147th street in the Kew Gardens Hills section of Queens. The man, who is a licensed gun-owner and well-trained in the use of firearms, ran out of his home and found three men on his property.

As can be seen in the footage below, two men are seen running off the property and jumping a fence with the homeowner in hot pursuit. The man keeps searching the yard when suddenly a third man is seen. The homeowner immediately orders the suspect onto the floor at gunpoint, telling him not to move. Meanwhile, the mans wife was inside the home calling police. Officers arrived seconds later, and quickly took the man into custody. The other two suspects had fled the area.

Watch the videos below to see the importance of vigilance, remaining calm and being properly trained. Boruch Hashem, he and his family are safe. The video also shows the importance of good lighting and functioning cameras.

The man is grateful to the brave officers of the 107th Pct who arrived speedily, apprehended the suspect and calmly verified the homeowners credentials.