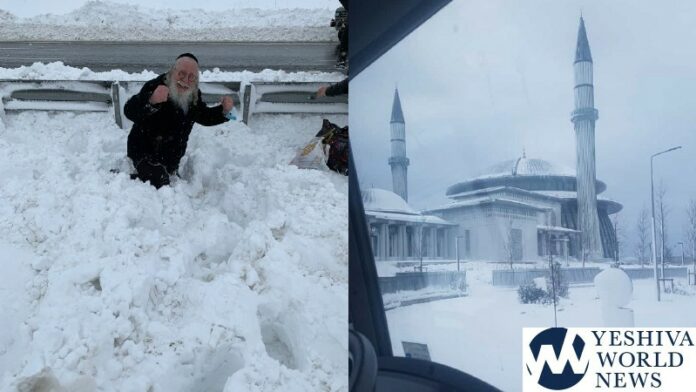 A frum man who was in Turkey as a kashrus mashgiach was forced to spend the night in a mosque after becoming stranded in a severe snowstorm.

The Chief Rabbi of Turkey, Rabbi Mendy Chitrik, said that the mashgiach was on the E-5 highway when a paralyzing snowstorm caused hundreds of motorists to become stranded. After sitting for hours on the road, Turkish Army trucks came and evacuated the motorists to a mosque near Instanbul Airport.

“The people were very nice and helped us at the heated mosque,” the mashgiach, Rabbi Yisroel Elbaum told Bchadrei Chareidim. “At 11 in the morning they took us back to our car, and from there we drove back to the hotel. We were on the road for 25 hours we were on the road. Rabbi Mendy Chitrik helped us a lot; it is a situation that I won’t easily forget.”

Turkey has approximately 400 factories that churn out food-related goods, and dozens of mashgichim are in Turkey throughout the year to oversee the kashrus aspects of the production process.