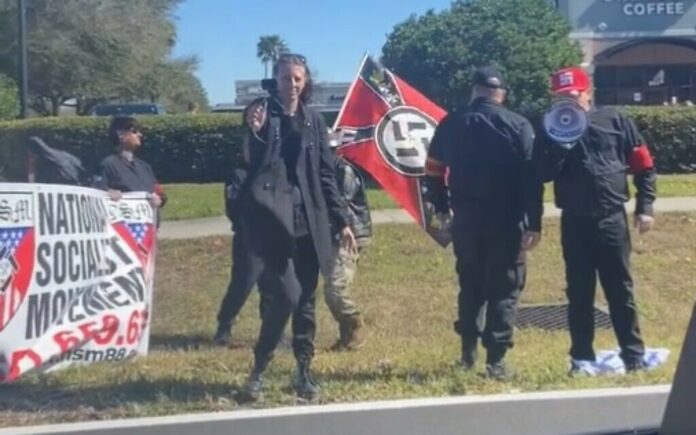 More than a dozen self-proclaimed Nazis yelled antisemitic slogans outside a Florida shopping plaza and waved a swastika flag from a highway overpass before authorities broke them up over the weekend.

The demonstrators, wearing Nazi garb, protested at an intersection near the University of Central Florida on Saturday and on a highway overpass on Sunday.

During Saturday’s demonstration, some participants got into a fight with a passerby, but no arrests were made and an investigation is ongoing, according to the Orange County Sheriff’s Office.

Authorities from the Florida Department of Highway Safety and Motor Vehicles and the Florida Highway Patrol said in a statement that they and sheriff’s deputies had disbanded the group on the overpass Sunday.

“It is against the law to obstruct highway traffic or hang signs on the overpasses and violators will be prosecuted,” according to the statement.

Orange County Sheriff John Mina said any reports of criminal activity by the group would be investigated by his agency. Orange County in central Florida is home to the nation’s biggest theme park resorts.

“I along with the Orange County Sheriff’s Office deplore any type of hate speech,” Mina tweeted. “This hatred has no place in our society.”

Republican U.S. Sen. Rick Scott, Democratic Orlando Mayor Buddy Dyer and other elected leaders issued statements declaring that antisemitism and hatred have no place in Florida. The demonstrations took place a week after antisemitic flyers were distributed to hundreds of homes in two South Florida cities with large Jewish populations.

“Despite displays of hate in Central Florida this weekend, our collective commitment to building an inclusive, compassionate community for all is stronger than ever,” Dyer said in a tweet.

Local Democratic lawmakers said they were appalled by the demonstrations and urged Republican Gov. Ron DeSantis to condemn the demonstrators. The governor’s spokeswoman, Christina Pushaw, said in a tweet that Democrats were insinuating that DeSantis’ policies were responsible for the demonstration.

The governor “has ALWAYS condemned antisemitic attacks & hatred, and he always will,” Pushaw tweeted. “To suggest otherwise is just plain wrong.”