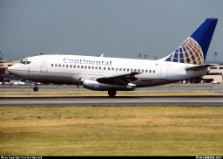 The Federal Bureau of Transportation Statistics released data Monday listing Newark 32nd out of 32 major airports with 62 percent of arriving flights on time last year.
That’s better than the 59 percent Newark posted in 2007, but it’s well below the national average of 76 percent for 2008.

New York’s La Guardia and JFK airports also ranked in the bottom quarter, though JFK improved its on-time departures from 69 percent in 2007 to more than 75 percent last year.