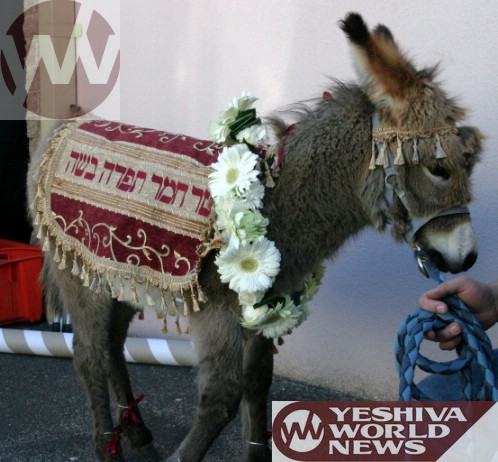 [VIDEO & PHOTO LINK BELOW] One of the largest gatherings of Orthodox Jews from all sectors of the Melbourne community were zoche last Sunday to witness the unique and rarely-fulfilled Mitzvah of Pidyon Petter Chamor.

Not only is this a first for Melbourne, but it is safe to say that never before has such an event taken place outside of the main centers of Jewry, ie, Eretz Yisroel, Europe and the Americas.

The story begins with two chaverim, members of the Adass Yisroel Kehilla who have had attended a Gemara Shiur for the past 20 years. Mr Berel Goldberger, a Viznitzer chosid who happens to be one of Australia’s leading taxation authorities and Mr Binyomin (Yumi) Friedman, a Belzer chosid, co-proprietor with his brother Moshe, of Yumi’s Seafoods, a nationally renowned producer of a multitude of gourmet food items sold throughout Australia and owner of Australia’s only Kosher fish store.

Their Shiur takes place in the Adass Beis Hamedrash at 5.00 am daily, where the sound of Torah is heard from 4.00 am onwards. Dozens of men and boys partake in a variety of Daf Yomi and other shiurim.

Some time ago Berel and Yumi (as they are known) whilst learning (in Kiddushin 37a) about the Mitzva of Pidyon Petter Chamor and that it may be performed in Chutz La’aretz and bizman hazeh, decided to investigate the possibility of fulfilling this rare and unusual Mitzva.

The first thing required was a suitable female donkey, one that had not yet produced any offspring. This they found in a donkey breeding farm in Canberra, Australia’s national capital.

To ensure that every step of the way was done 100% al-pi-halocho, they consulted with and followed the minute instructions from Adass Yisoel’s Mara de’Asra, Rav Avrohom Zvi Beck shlita.

Rav Chaim Heimlich shlita, a dayan of the Kehilla was also constantly involved with helping in matters of Halacha.

To perform the Pidyon, the donkey had to be theirs by legal purchase. Normally this done via a ‘kinyan meshicha’. However, as Canberra is several hundred kilometers away, they couldn’t be ‘koneh’ the animal using that method; therefore they followed the process of ‘kinyan chotzer’ – through buying it through land which they leased from the farmer. Thus the sale and the lease were documented legally with all associated fiscal arrangements – including GST taxes – fully paid.

Then came the wait of over 12 months – the period of the pregnancy.  Finally the foal was born. But to the chagrin of the owners, they were called by the breeder and told that it was a female!

Though disappointed, Messrs Goldberger and Friedman did not give up. They resolved to try again and go through the entire process. However, before they could begin repeat arrangements, they received another call from the breeder saying that an error had been made and that the baby donkey was actually a male!

Normally a government-registered breeder would have full ne’emonus on such matters.
But in this case, because it was first said to be a female, Rav Beck requested that tests must be made. This was to ensure that the male foal was indeed the offspring of this mother and hadn’t been substituted. Incidentally, as is the case with all donkeys bred, the mother was tagged and had a chip inserted for identification purposes.

In addition to other halachic simonim of motherhood, a DNA test was done on the animals, but difficulties were encountered with the first 2 tests as the newly-born foal’s hairs were too light and thin to correctly register. The 3rd time, however, Boruch Hashem, the DNA clearly showed that the foal was indeed the much awaited Petter Chamor, (which of course it was immediately named “Peter”) with the proud owners getting “Mazel Tovs” from all over.

Berel and Yumi were fortunate to have the services and assistance of a local Shomer Shabbos vet Mr Jeremy Goldin whose experience was invaluable.

Due to the excitement generated by this extraordinary Mitzvah, many people began to take an interest and learn the Halachos of Pidyon Petter Chamor. Additionally, a series of special public Shiurim were given by Adass Dayan and Rosh Kollel, Rav Yehudah Katz shlita. Shiurim were also given on the topic by Rav Binyomin Wurzburger at Kollel Beis HaTalmud, and by Rav Moshe Donnebaum at Heichal HaTorah.

Last Sunday, the much awaited ceremony took place in the grounds of the Adass Yisroel Beis Yaakov school in Elsternwick. A large elevated stage was erected to ensure that the entire tzibbur could view the proceedings. Young children were allocated seating space at the front of the stage, whilst a separate area was designated for the ladies and girls of the community. The attendees included most of Melbourne’s rabbinate and young and old from nearly every Shul and shteebel. Also in the crowd was the popular Federal parliamentarian Michael Danby whose electorate includes all of Melbourne’s heimishe areas. This seemed apt as the donkey was born in Canberra, the home of the Australian parliament.

Proceedings began with the decked-out and lively “Baal Simcha” Peter being brought in and placed on the stage where he was kept steady by handler and the vet Mr Goldin.
This was followed by the arrival of the sheep – which was also placed on the table and cared for by a handler.

Local Maggid, Rav Shimon Opman introducing the Rav shlita who in his Divrei Torah pointed out that all of us can be presumed to have partaken in this rare Mitzva by fulfilling ‘VeAhavta leReacho Komocho’ – and the owners having in mind that they are doing this Mitzva “Beshem kol Yisroel’. In his words the Rav shlita stated that we, Bnei Yisroel who are all considered bechorim, (“B’ni Bechori Yisroel”) ask that HKBH also act to be “podeh” his Bechor speedily. He ended by giving his brocho that we should all be soon zoche to witness the arrival of Moshiach – riding on his donkey.

Rav Opman then gave a short informative explanation on the details of the Mitzva and also spoke about the various occurrences of the “chamor” in the Torah and Chazal – including Avrohom Avinu (“Vayachvosh es Chamoro”), Yisochor Chamor gorem, Moshe Rabenu, Bilom’s donkey and the much awaited ‘Chamoro shel Moshiach”.

Part-owner Berel Goldberger recited the rarely-heard brocho of “al Pidyon Petter Chamor” to a thundering “Omein” from the crowd. Yumi Friedman then said the Nusach required as he handed the sheep over to the Kohein, his father-in-law Reb Nesanel Fried who responded. This was followed by Yumi Friedman saying the brocho of “Shehechyonu”.

Reb Cheskel Friedman and the assembled children entertained the crowd with appropriate songs.

This fascinating event was followed by a ‘leChaim’ for the entire tzibur.

In order to do further mitzvos with the Pidyon Sheep, Yumi Friedman went to the local shechita this morning (Tuesday). The sheep was shechted, the “matonos” (zeroya, lechayim, v’keiva) given to a kohein, and with the sheepskin they are planning to make a cushion to be used at brissim.