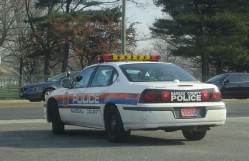 Long Island, NY – Authorities are offering a $6,000 reward to catch whoever spray-painted swastikas last week on a Chabad House in Mineola. The money comes as police detectives are reviewing videotapes of the area for evidence.

Anonymous tips, which the Nassau police promise will be kept confidential, can be phoned into 800-244-TIPS, authorities said.

The graffiti, which cops are investigating as a bias crime which carries tougher punishment, was scrawled sometime between 5 p.m. on July 2 and 5:30 a.m. on July 3 on the front doors of the Shul at 261 Willis Ave.

“This is something we cannot tolerate and will not tolerate, and we will make sure that we hold people accountable for this type of behavior,” Nassau County Executive Thomas Suozzi said on the steps of Congregation Beth Shalom Chabad early Wednesday afternoon.

A police source said investigators are in the process of reviewing videotapes from the area, including from places such as local businesses that have security or surveillance cameras.

Three vehicles on nearby Lincoln Avenue were also vandalized by the hate graffiti, police said.

“This despicable attack on us is also an attack on all of us,” Beth Shalom’s rabbi, Anchelle Perl, said before leading a crowd that included Suozzi, the police commissioner, Lawrence W. Mulvey, and congregants in song.

“We are very grateful living here in the United States of America to have had little experience of anti-Semitism,” Perl said. “So when last Friday morning we discovered a large swastika painted on the front doors of our beloved shul, we felt hurt, we felt sad and we felt violated.”