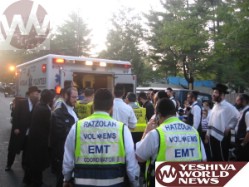 [PHOTOS & VIDEO LINK BELOW ARTICLE] The following article should serve as a warning to the hundreds of people who walk on Fraser Road in Monticello:

At approximately 7:30PM on Sunday evening, Catskills Hatzolah was dispatched to reports of an elderly person struck by a vehicle on Fraser Road near Continental Bungalow Colony.

Arriving units found an elderly female unconscious lying in a ditch on the side of the road. Paramedics were expedited to the scene and a medevac was placed on standby.

As paramedics arrived on the scene, the patient Boruch Hashem began responding verbally – but not coherently.

She was transported to a local hospital via a Catskills Hatzolah ambulance.

It does not appear that she was actually struck by a vehicle, but it is very possible that a car passed her closely, and scared her causing her to fall backwards into a deep ditch, knocking her unconscious.

This story should be a warning to the hundreds of women who walk on this particular road THREE ACROSS! Many people walking feel that every car will see them, and will automatically yield to them. Unfortunately, the road is very narrow, with no shoulders, and drivers seem to be driving through a maze – while yielding to the groups of people walking on the road.

Any driver familiar with Fraser Road will tell you that it’s not a matter of “if”, but “when” someone will Chas Veshalom be killed on this road – either a pedestrian, or a vehicle hitting another vehicle in a head-on-collision.

PLEASE – yield to the vehicles! STOP walking for a second, and get off the road to allow vehicles to pass! And lastly, don’t walk at dusk when drivers are unable to see pedestrian’s walking.

This story could have had a very sad ending. Let’s make sure that nothing will ever take place again.