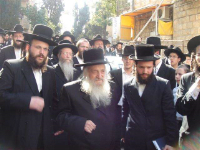 Maran HaGaon HaRav Shmuel Halevy Wosner Shlita has come out strongly against this week’s decision announced by members of the Chief Rabbinate of Israel Rabbinical Council regarding determining time of death. The Rabbinate has accepted what is perceived as a leniency, relying on brain death following a number of tests to confirm the person is no longer alive, as opposed to R’ Wosner and Maran HaGaon Yosef Sholom Elyashiv Shlita, who maintain for as long as one’s heart is beating, a pronouncement of death cannot be made.

In his Shabbos Shuva drasha given on Thursday night, R’ Wosner quoted the Chassam Sofer, Chacham Tzvi and other gedolim, citing that the brainstem activity is not the determining factor for as long as one’s heart continues to beat.

R’ Wosner spoke of the unfortunate situation, which he states rabbonim and physicians are involved in the human organ business.