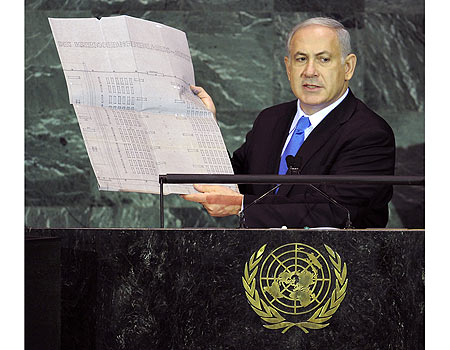 [VIDEO LINKS AT END OF ARTICLE] In his address before the UN General Assembly, Prime Minister Binyamin Netanyahu issued a call to the international community to stand firm and unite against Iran. Waving the plans of the Auschwitz concentration camp, the prime minister stated the statements uttered by Iranian President Mahmoud Ahmadinejad are simply a lie — his Holocaust denials are a lie.

The prime minister told the international body that its main objective must be to unite to prevent Iran from achieving nuclear independence. He called the battle against Iran one of “civilization against barbarism”. He warned of the extremist fundamentalism that fuels the Iranian regime, warning the Iranian leader is not only a threat to Jews, stating those who believe this to be the case are “dead wrong”.

Mr. Netanyahu condemned the decision-makers for permitting Iranian Ahmadinejad to address the international forum, adding words of praise for those nations who representatives exited to exhibit their boycott of the event. He asked rhetorically how the decision-makers granted the Holocaust denier a forum, adding “Have you no Shame? No decency?” The prime minister called it a disgrace.

The prime minister then addressed the diplomatic process with the PA (Palestinian Authority), Netanyahu stressed Israel’s yearning for peace, stressing the need for others to abandon terrorism, confident with “hard work, peace can be achieved”.