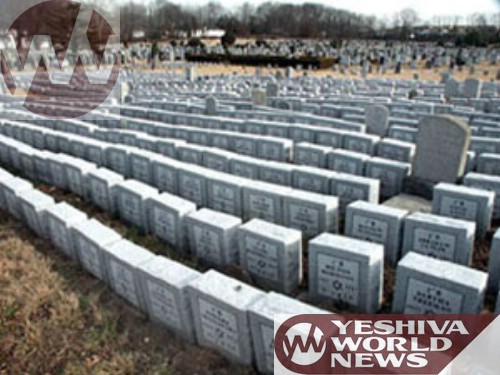 NEW YORK – Early this morning, 266 previously unmarked graves of indigent Jews buried at Mount Richmond Cemetery on Staten Island were given modest gravemarkers by the non-profit organization who arranged their funerals. Hebrew Free Burial Association, a 120-year-old organization that has buried 60,000 indigent New York Jews who couldn’t afford burials, has in recent years dedicated itself to marking every grave in its cemeteries with a simple monument noting the name and years of life of the deceased.

“After much research and generous donations, Hebrew Free Burial Association has been able to dignify the life and death of hundreds of New York Jews with gravemarkers,” says Amy Koplow, executive director of Hebrew Free Burial Association. “When a loved one dies, or a Jew dies alone without friends or family, HFBA steps in, ensuring that any Jewish deceased, regardless of affiliation or financial means, is treated with compassion and respect.”

Leave Your Mark is a program to install simple permanent markers at unmarked graves in Mt. Richmond Cemetery. This program benefits the thousands of families and friends who visit the cemetery each year, as they find a place of dignity and repose where respect is paid to the memory of every person buried therein. The presence of stone markers at each grave will prevent persons from walking across grassy areas which appear to them unused, when in fact they contain graves of persons buried long ago. The markers are testimony that they are not forgotten, that the Jewish community still cares even a century later, as witnessed by the fact that nearly 15,000 unmarked graves, dating back to 1909, have been marked so far, through the generosity of donors and foundations.